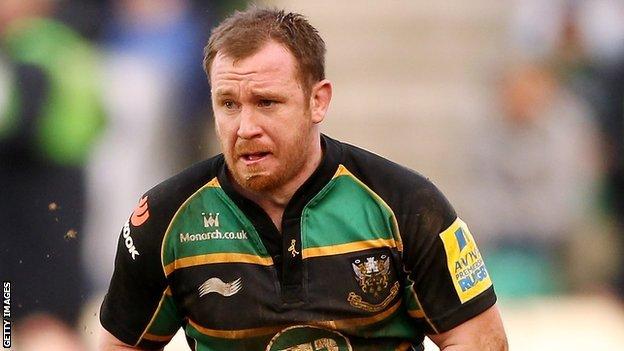 Northampton Saints wing Paul Diggin will retire at the end of the season, aged 29.

Born in the town, Diggin's first Saints appearance came 10 years ago in February 2004.

"They don't come more local than Paul Diggin, coming from the St James area of Northampton.

"He's always been a favourite at Franklin's Gardens - not just because he's from the neighbourhood, but for his unflinching commitment to the cause which clearly meant so much to him.

"He's young to call it a day, but he has so much now to offer as a coach, imbuing the academy youngsters with the history and culture of Northampton Saints."

He went on to play 148 times for the club and score 310 points, but has concentrated more on his coaching role with the academy this season.

"I haven't played all year so it's nice to say I'm looking towards the next stage," he told BBC radio Northampton.

"I still love playing the game and if I want my fix I can play it socially. But I think this is the best move going forward.

"I've played in a Heineken Cup final, helped my team win at Twickenham and have collected a number of winners' medals.

"What has meant more to me is that this has all come at my home-town club."

Director of rugby Jim Mallinder added: "Paul has always given 100% regardless of whether he has been playing in the first team, Wanderers or sevens teams.

"He has a lot of experience and knowledge that he can pass on as an academy coach, and I'm delighted that he is staying at the club in that capacity."