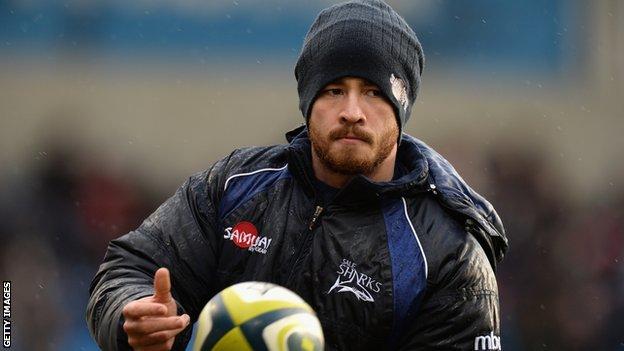 England will include Danny Cipriani in a preliminary squad ahead of the forthcoming match against the Barbarians and the tour to New Zealand.

It will be fly-half Cipriani's first England involvement since he won the last of his seven caps in 2008.

Gloucester's Freddie Burns is also expected to be included in Thursday's initial squad of around 15 players.

Club appearances: 19 (including 6 as sub)

The squad will be selected from the six clubs whose season is over - Exeter, Gloucester, London Irish, Newcastle, Sale and Worcester Warriors.

Lancaster has not considered players from the four Premiership semi-finalists Saracens, Northampton, Leicester and Harlequins, or Bath and Wasps, who are still involved in European action.

England face the Barbarians at Twickenham on 1 June, then meet New Zealand in the first Test at Auckland on 7 June.

England will then face the All Blacks in Dunedin on 14 June in the second Test before the third and final Test in Hamilton the following weekend.

Depending on which teams make the Premiership final, the England head coach will then call up players from the other six sides to a final touring squad of up to 42 players.

Any player involved in the Premiership final on 31 May will be unavailable for the game against the All Blacks in Auckland a week later.

Cipriani drifted out of England contention in recent years as he struggled with off-the-field distractions, but his game-management has been a key factor in Sale's sixth-place finish in the Premiership this season, just 12 months after the club flirted with relegation.

Lancaster says recent form is more important than past deeds, and feels Cipriani deserves a second opportunity on the international stage.

"I judge players on their form for their club. Reputation and what they've done in the past counts for something, but not everything," Lancaster said.

"Danny's definitely improved and Sale have played well. Danny has controlled the games really well. I'm pleased with what he's done and he's in the equation."