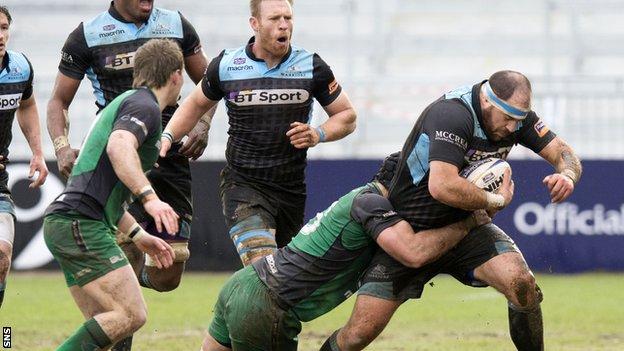 Ed Kalman is leaving Glasgow Warriors this summer, after being forced to retire due to a back injury.

Scott Wight and Finlay Gillies are also heading for the exit door when the Pro12 semi-finalists' season comes to an end.

Scotland international Kalman has made 101 appearances for Warriors.

"Glasgow is the city I grew up in and call home, to have represented the city and its fans over 100 times is my proudest achievement," said Kalman.

The 31-year-old joined Glasgow, who take on Munster in the Pro12 semi-final at Scotstoun on Friday, from Border Reivers in 2007.

"Having taken a rather unconventional route to professional rugby through Durham and Cambridge University, the idea that I would play even one game of professional rugby seemed implausible, so to have played for over eight years and to have represented my country is beyond anything I could have ever dreamed of," Kalman added.

Warriors head coach Gregor Townsend said: "Ed has played a big role at the club in recent years and this season he became one of our centurions. He has also been in the best form of his career and we're disappointed for him that he has to retire."

Wight joined in 2011 from Melrose and has featured 26 times, scoring 75 points, while Gillies came through the Scottish Rugby Elite Development Programme and made 24 appearances for the club.