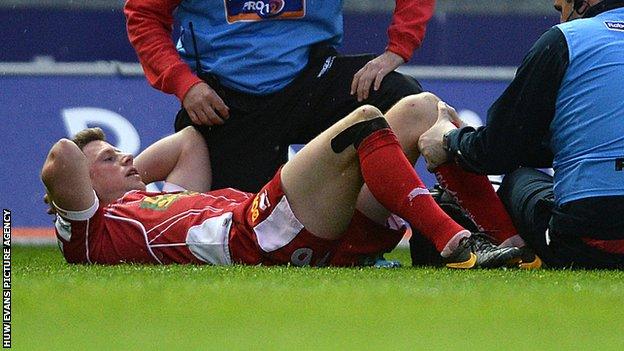 Wales and Scarlets outside-half Rhys Priestland is out of Wales' tour to South Africa in June.

The 27-year-old injured his knee in the region's last game of the season in the 27-15 win against Cardiff Blues.

Priestland, who is to undergo surgery, will be out of action until August and is the 10th player to drop out of the tour through injury.

Ospreys scrum-half Rhys Webb is also a doubt for Warren Gatland's 31-man squad because of a knee problem.

Priestland started Wales' Six Nations campaign as the first choice number 10 but lost his place to Dan Biggar by the end of the tournament.

Biggar will now be favourite to be first-choice number 10 on tour.

A trial match will be staged ahead of Wales' tour on 30 May at the Liberty Stadium, ahead of the squad announcement.

Gatland has named a number of potential replacements for Priestland in the Probables and Possibles squads.

Leicester's Owen Williams is one tour option, but England's clubs have stated they will not release players for the Wales trial.

In any case Williams hopes to help Leicester reach the Aviva Premiership final that takes places a day after the Wales trial.