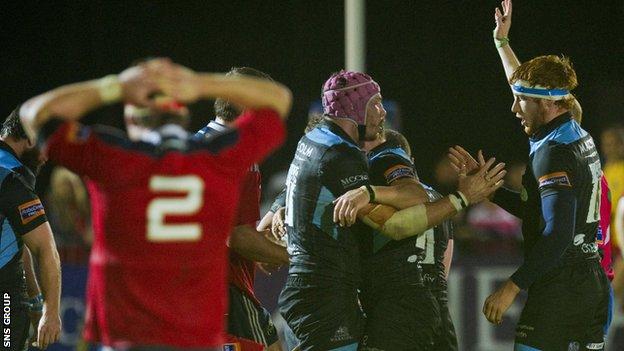 Head coach Gregor Townsend insists Stuart Hogg is just one of a host of players unlucky not to be involved in Glasgow's Pro12 semi-final.

Peter Murchie is preferred to the Scotland full-back for Friday's clash with Munster at Scotstoun.

"We've used 36 players in the last eight games and we've managed to win them all," Townsend told BBC Scotland.

"There are a number of international players who haven't made it and some have been in good form."

Hogg, 21, returned from a three-week suspension to feature in Glasgow's final two league matches, scoring two tries in the 54-0 demolition of Zebre.

But he is missing from the match-day squad, along with Duncan Weir, Scotland's first-choice fly-half during the Six Nations.

Finn Russell is given the number 10 shirt by Townsend, who is hoping the Warriors can reach their first final.

"I genuinely believe we could put any of those 36 guys out on the field and we'd have a strong side," he explained.

"I'm very pleased with the team we are going into battle with and the players that didn't make it have been very supportive, helping the guys throughout the training week.

"We've picked players in form and to deal with what we expect from Munster - looking at individual match-ups as well as our game plan.

"Such is the nature of the competition in every position - we have two or three in most positions that would feel unlucky.

"Peter Murchie has had a great run of games. He's been involved in most of our eight wins.

"He scored two tries against Edinburgh and looked good when he came off the bench against Zebre.

"The players found out on Tuesday morning and have all conducted themselves professionally. Yes, there is disappointment but they have all helped the team prepare well."

Munster won on their last visit to Scotstoun but that was revenged by a 22-5 victory in Limerick last month.

"We've had two competitive games with them this year and winning at Thomond Park was probably one of our best performances of the season," added Townsend.

"This is semi-final time, so we know we have to be at our best.

"They are an experienced side and will come all guns blazing. We have to match that and get our game going."

Glasgow have lost out narrowly at this stage in the last two seasons but a home side has never been defeated in the short history of the play-offs.

"I'm delighted that we are at home," enthused Townsend. "We're going to have 10,000 supporters, with the majority cheering us on. The pitch is in good shape and the weather is going to be great. There will be a lot of noise behind us and that gives you a bit of extra energy.

"We've had record crowds a couple of times this season and we're building good momentum on and off the park.

"We played our best game of last season in the semi final and lost out by two points to Leinster, so we know we have to reproduce our best this time."