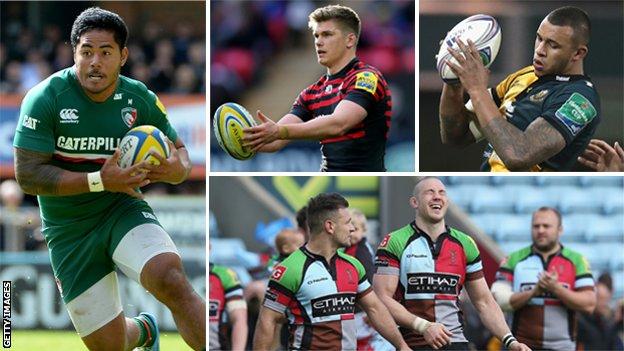 The 2014 Premiership play-off semi-finals have produced two derbies and we are set for a couple of close contests on Friday and Saturday.

The character of the two matches is likely to be different, with Northampton hosting Leicester in the cauldron that is Franklin's Gardens on Friday night before Saracens welcome Harlequins to the less intimidating Allianz Park on Saturday.

But if the atmosphere among the crowd at the former is likely to be more intense than the latter, there will be little difference in the temperature on the pitch.

It is always lively between these two Midlands neighbours and, with a place in the final at stake, the Franklin's Gardens is likely to be even more passionate than usual.

Northampton will have most of the fans cheering for them but Leicester will not be intimidated. They are unbeaten in their past nine Premiership meetings with Saints, a run that includes last year's final at Twickenham.

I admire Leicester - you have to admire a side that get results and win trophies like they do - and if they get through it will be a remarkable 10th Premiership final in a row for the Tigers.

Having said that, when I look at their team they are a side punching above their weight. Bar Manu Tuilagi, they have no superstars, although Niki Goneva has been in fine form this season and is the leading try scorer in the Premiership with 12.

However, they really graft and fight for one another and they understand what it takes to win.

They have been hampered by injuries but are in the last four by right and it would be very risky to bet against them not making the final.

Northampton have a number of special talents, and Wales wing George North is one of the best players in the world. He may have scored only a handful of tries but he has settled in well following his move last summer and is setting the standards mentally and physically.

Despite that, the difference for Saints this season has been fly-half Stephen Myler, who has given them the consistency they need.

Outside him they have weaponry of the class of the Pisi brothers, Ben Foden and England centre Luther Burrell, who has been electric.

Leicester boss Richard Cockerill may not have quite the same individual firepower to call on but he has brought his team to the boil at just the right time.

The Tigers pack is always a dangerous unit and this current eight continues the legacy. Second row Geoff Parling will be trying to show he is still in England contention and open-side flanker Julian Salvi has a very good work-rate.

Leicester are a well-drilled unit and know how to deliver on the big occasion, but I think they are going to have their work cut out stopping Saints.

Result: Saints by a score in humdinger

This pits north London versus south west London as Saracens, who are already into the Heineken Cup final, look to reach a second showpiece by defeating visitors Harlequins.

While Quins - champions in 2012 - must travel to the table toppers, in a way they could not ask for a better trip because the atmosphere will be less intense than at Franklin's Gardens and the plastic pitch will help their fast-paced attacking game.

Saracens have their critics because of their defence-orientated and territory-focused gameplan, but they can play rugby and there is a reason they finished top comfortably during the regular season.

They deserve to be in the final on their performances this season but this is a shoot-out and anything can happen. Wasps never used to top the table but they used to time it to perfection with a late-season charge - and Quins might have timed it just right.

Their captain, Chris Robshaw, is playing very well. He is a real team player who grafts, passes well, has a high work-rate and leads by example.

At fly-half, Nick Evans is an experienced and classy operator and England scrum-half Danny Care is on fire - his speed of mind and foot is at the heart of Quins' high-tempo gameplan.

Up front, England loose-head Joe Marler has matured this season and, when he concentrates on doing his job, he is up there with the best.

Sarries will think they can overpower them and smash them at the scrum but one reason behind Quins' success is that they have been hooking the ball well at scrums. That quick ball from Dave Ward and co gives Care more time at the base, so watch out for that; it is impressive.

There is always a but when it comes to talking about teams playing Sarries and it is very hard to look past the 2011 champions.

On the wings they have the in-form Chris Ashton and the second top try scorer David Strettle, who has 11 to his name in the Premiership this season.

Inside centre Brad Barritt organises the defence, while on the flank Jacques Burger does the tackling work of three people.

Former England captain Steve Borthwick leads a fine line-out operation, they have a solid scrum and hooker Schalk Brits is a joy to watch - he can do everything and could play anywhere he wanted on the pitch.

Add in the likes of young England stars Billy Vunipola and Owen Farrell and Saracens have just about the complete team - the only criticism is that they miss a little bit of off-the-cuff creativity in midfield.

Farrell has stepped up this season and stands flatter, and he must be passing more because Sarries are scoring plenty of tries, but his breaks and assists are very low.

That is not to detract from Sarries. They have bonded really well as a unit and Quins must start quickly and get the jump on Saracens like Northampton did last year in order to have a chance.

Verdict: Saracens by a score