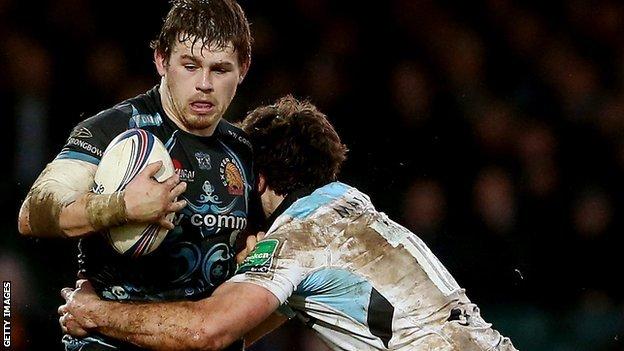 Cowan-Dickie has started only three league games and one Heineken Cup match this season but has made England head coach Stuart Lancaster's 20-man party.

"You never think it's going to happen so it's a dream come true," the 20-year-old told BBC Radio Cornwall.

"At first I couldn't really believe it, having not played a fair deal of Premiership rugby this year."

He added: "I've started the last couple of games and then to look at the announcement and see my name there is pretty amazing."

The players selected in the training squad have a chance of being included for the game against the Barbarians on 1 June and the subsequent three-Test tour of New Zealand, which begins the following week.

The final party for those matches will be announced on Monday, 26 May.

Cowan-Dickie, who signed a new contract earlier this month, is one of a crop of Exeter youngsters who are starting to impress the England selectors.

Along with full England international Jack Nowell and Henry Slade and Sam Hill, Cowan-Dickie was part of the England side that won the Under-20's World Cup in France last summer.

England will also play a match against the Barbarians on 1 June at Twickenham. The squad will then travel to New Zealand in two groups - the first on 27 May and the second on 2 June following the Premiership final and Barbarians game.

Nowell, who played junior rugby with Cowan-Dickie in Penzance, has missed out on England selection after undergoing an operation, but Slade and Hill have also been called up for the first time, alongside fellow Chiefs players Tom Johnson and Dave Ewers.

"It's always great to have a couple of us in there," Cowan-Dickie added.

"Now that Stuart Lancaster's picked five of us to be in the training squad and if Jack Nowell wasn't injured it'd be six.

"It's good to get as many of the Chiefs boys as we can in the team and it'll make all of our natural games better."