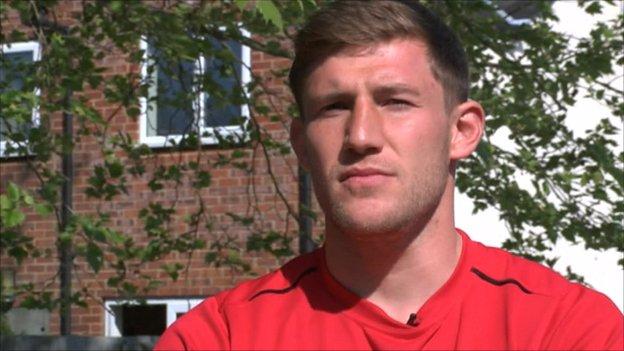 London Welsh full-back Alan Awcock says his side must improve their discipline if they are to reach the Championship final.

Welsh have to overturn a seven-point deficit against Leeds Carnegie in the second leg of their semi-final clash.

They conceded 24 points from penalties last weekend as they went down 38-31.

"We cannot ship 24 points from penalties and expect to be in with a chance of getting into that final," Awcock told BBC Radio Oxford.

And Awcock says following last week's clash at Headingley there is a real edge to the return match at the Kassam Stadium.

"It been a really good week leading up to this game," he said. "We've got a seven-point deficit to overturn. There is a bit of an edge but we are really looking forward to it.

"It's cup rugby, it's the business end of the season and it could end on Sunday or we could be in the final on the fourth of June."

Head coach Justin Burnell echoed Awcock's sentiments and has backed his side to cope with the pressure of playing knock-out rugby on Sunday,

"We've worked so hard all season to get to this point, and now we're here we don't want the season to end. We want to keep it going," said Burnell.

"We know how good Leeds are, but Sunday has to be all about ourselves. It's a massive game and we're really looking forward to it.

"The seven-point deficit isn't going to affect our game. We're not going to be running from our own 22 and were not going to be just kicking for the corner - we're going out to win the game. We just want to keep the scoreboard ticking over.

"Preparation this week has been absolutely fantastic. I've said it from day one that the biggest thing that's impressed me about the squad and staff within London Welsh is that they react so well to pressure."