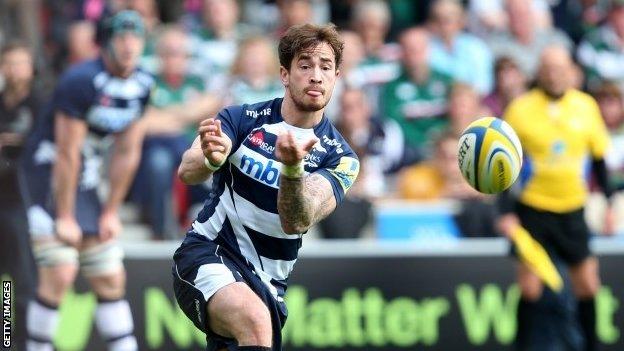 Danny Cipriani's career has never been short on incident.

While a heady mix of match-winning brilliance and costly errors have filled the sports pages, the Sale fly-half's celebrity hook-ups, dressing room bust-ups and ill-advised nights out have been celebrity magazine fodder.

What the story has lacked is international caps.

He has appeared just seven times for England since his debut as a precocious 20-year-old in 2008.

Injury, indiscipline and indifferent form, combined with a move abroad, have left his potential largely unfulfilled.

But after an impressive and controversy-free season, steering Sale to a sixth-place finish in the Premiership, Cipriani has been called into an England training squad ahead of the summer tour of New Zealand.

Does he deserve a full recall?

Cipriani is by no means assured of a place on the plane for the three-Test series against the 2011 World Cup winners, never mind a chance to pull on the number 10 jersey.

Saracens's Owen Farrell and Bath's George Ford are both ahead of him in coach Stuart Lancaster's fly-half plans.

But since Toby Flood announced that he would move to Toulouse from Leicester at the end of the season, taking himself out of international consideration, there is at least one vacancy to be filled.

Lancaster may opt to take four fly-halves on tour, particularly given that the first meeting with the All Blacks comes hard on the heels of a demanding domestic season that is still not over for either Farrell or Ford.

Cipriani's club team-mate Mark Cueto has no doubt that he should be given a chance ahead of rivals Stephen Myler and Freddie Burns, of Northampton and Gloucester respectively.

"I think he has got to be picked," the former England winger told BBC Sport.

"Naturally Owen Farrell and and George Ford are number one and two without a doubt.

"But I think behind that, when you look at Cips, Stephen Myler, and Freddie Burns, I think Cips is 100% at the top of those three. For me has to go as the third 10."

Cipriani ended last season in Accident and Emergency at Leeds General infirmary rather in international consideration.

A night out to mark the close of an underwhelming campaign, during which Sale flirted with relegation and Cipriani struggled to keep his place ahead of Nick Macleod, ended with him drunkenly running in front of a bus.

Long before he was discharged, then-team-mate Andy Powell had taken to Twitter to hail it as Cipriani's "best tackle of the season yet."

Brian Kennedy might well have agreed. The Sale owner had launched a stinging attack on his big-money signing back in December 2012 after a defensively suspect performance in the 62-0 defeat by Toulon.

"Danny didn't want to tackle," Kennedy said, accusing him of not being "prepared to put your body on the line for this club, who pay your wages and give you the chance to play at the highest level each week".

It isn't the first time that the accusation has surfaced in Cipriani's career with Josh Lewsey reportedly so irritated by his team-mates' flimsy defence and prickly attitude while at Wasps that he ended up punching him out cold.

Sale coach Steve Diamond has had no complaints on that front this time around though with only Ford, the son of former England defence coach Mike, making more tackles than Cipriani at fly-half in the Premiership this season according to Opta.

"He needs to go out to New Zealand, play to the best of his ability and show the critics that are still around that he is a changed man mentality-wise," he told BBC Sport.

"His defence is right, his tactical kicking is right. If he goes on tour, he needs to get his percentages as high as possible, whether that is his kicking goals, or making line breaks, or hitting people."

Why has it taken so long?

Jonny Wilkinson came on as a replacement for the last 27 minutes of England's Six Nations win over Ireland in 2008, but before the World Cup winner could take up position as an experimental centre, he was given a barrage of instructions by Cipriani.

It seemed a watershed moment, the point where Cipriani took his place as England's creative fulcrum for years to come. Instead it was the peak of his short international career.

Brian Ashton was replaced by Martin Johnson the following month and, while Cipriani started in Johnson's first game in charge, his form was erratic after a rapid recovery from a horrific ankle dislocation.

Cipriani's charged-down kicks cost his side tries against the Pacific Islanders and South Africa and by the end of the autumn series he had been dropped to the bench.

Cipriani claimed he would have "probably done the same thing" had he been coach. If so, it was one of the few times he and Johnson were in agreement.

The personality clash between the taciturn coach and upstart fly-half was so stark that by the time the 2010 Six Nations came round, Cipriani reportedly cheered on Wales and mocked Johnson in front of the second-string Saxons.

With his hopes of an international recall shot, Cipriani upped sticks from his native west London to sign a contract with Super 15 franchise Melbourne Rebels in Australia.

It gave him the chance to play alongside similarly-minded Australian mavericks Kurtley Beale and James O'Connor, but there were more off-field scrapes.

In February 2011 he was fined by his club for taking a bottle of vodka from behind the bar without paying and three months later was banned by his team for one match after breaking a team curfew.

His return to England with Sale has brought more stable influences back into his life.

His long-standing partnership with sprint coach Margo Wells has been revived, and Steve Black, Jonny Wilkinson's mentor at Newcastle and beyond, has helped sharpen his mental focus.

"It's good to be back in the country and to have those bonds. I think that's important for any player," Cipriani told BBC Sport.

"Everyone, as you grow older, does that sort of soul-searching and that level of maturing.

"But in the last 12 months I've had a lot of people around who have helped me do that,

"I feel very happy with who I am and where I am going now."

Might New Zealand be the first of many more caps?

Cueto, who has played alongside Wilkinson, believes Cipriani's realisation that this chance may be his last at international level has been as important as any motivational words from his inner circle.

"He is probably the most talented fly-half I have played with," he said.

"He knows if he doesn't get it right now, he is not going to get many more opportunities.

"He is 26 now and before you know it he will be 30 and past it so it is his last chance, particularly with this World Cup coming up."

Cipriani reacted to his call-up to England's training squad last week by tweeting that "the hard work starts now".

Playing a fresh and rested All Blacks side in New Zealand, with a set of players aching for a break, will be just that.

"Given the opportunity with a full-strength side, I think Danny could drive that car very quickly," said Steve Diamond, referring to Cipriani's ability to dictate play for England.

If he can jump-start his stalled international career on this tour, against the best in the world, it will be difficult to deny him a chance when England return to the northern hemisphere for their final season before the World Cup.