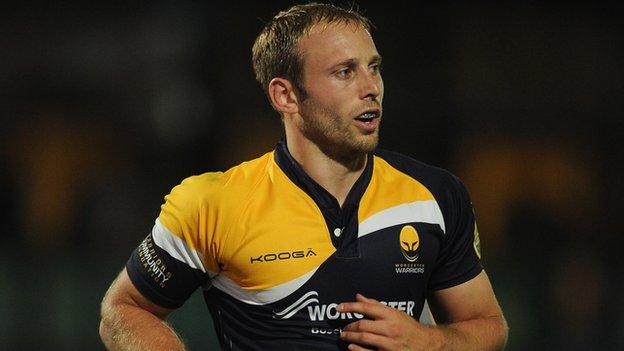 Worcester full-back Chris Pennell says being called up by England proves his international chances will not be harmed by playing in the Championship.

Pennell, 27, is in a 20-man squad to play the Barbarians before the tour party to New Zealand is named.

"I don't think my development will be hindered by playing second tier," he told BBC Hereford & Worcester.

"The fact I'm getting an opportunity with us being relegated suggests they're prepared to give me a chance."

If I'm going to play against the Barbarians, it'll mean I won't tour so it depends on where the coaches see me fitting in

Pennell has been outstanding in a very difficult season for Warriors, who were relegated from the Premiership following a record run of 22 consecutive defeats dating back over a year.

He was the only man to play every minute of every league game in 2013-14, his sparkling form even earning a nomination for the six-man shortlist to be named Premiership player of the season.

"It's been a very surreal couple of weeks," added Pennell.

"I'm amazingly pleased personally with what's happened and, given the season we've had as a club, maybe it's a slight sweetener to what's been a difficult year."

With Championship rugby at Sixways next season, Pennell's future has been the subject of speculatio, but the Warriors have ruled out any prospect of loaning their full-back to a Premiership club.

And Pennell, who signed a new contract until 2017 in December, is adamant that he can realise his England ambition with the Warriors.

"The selectors will be aware of the standard of coaching I'm getting," he said, "the fact that it's international standard.

"Fingers crossed they can see past relegation but I will be playing next season at Worcester for definite."

For now, Pennell's attention is on making the plane for New Zealand for England's summer tour.

That party will be named on 26 May, along with the side that will take on the Barbarians, wto be coached by Worcester director of rugby Dean Ryan, on 1 June.

Pennell knows his chances of being part of the main trip probably depend on not playing against the Baa-Baas.

"If I'm going to play against the Barbarians, it'll mean I won't tour so it depends on where the coaches see me fitting in," he said.

"It's mixed emotions, to be honest. I'd be happy to take either but I'm certainly going to be driving towards that plane ticket."