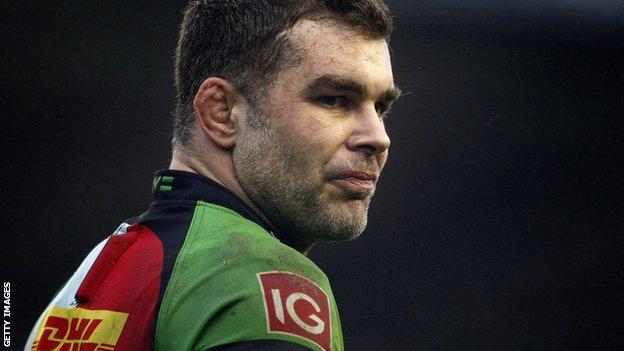 Harlequins forward Nick Easter says breaking the club's appearance record will only be memorable if they make the Premiership final.

The 35-year-old number eight will surpass the 232 games played by Ceri Jones when Quins face Saracens in their semi-final tie on Saturday.

"It's a very proud moment to win that many caps for such a prestigious club," he told BBC Radio 5 live.

"It will only be special if we win the game, to be perfectly honest with you."

The former England international added: "The only thing people remember when you retire - and if people don't remember you and people ask about you - is 'was he any good?' and 'what did he win?'.

"But in terms of the legacy you want to continue. We just want to win the game and it would be phenomenal if we did."

Easter joined Harlequins from Wigan-based side Orrell in 2004 and made his England debut against Italy three years later.

Having broken into top-flight rugby at the relatively late age of 26, the Epsom-born player is proud of his longevity.

"I did both at club level when I joined Quins, and when I broke into the England set-up, managing to make the World Cup squad in 2007. That takes a certain mental strength I suppose.

"To be able to maintain it is something I probably draw more pride from, because there are guys coming through thick and fast.

"So to be able to maintain it for as long a period as I have done, when I look back I'll realise it was quite a good effort. But for now, it's all about one game."

Easter, who has won 47 international caps for England, was named as forward of the year at the Premiership awards on Thursday.

When I look back I'll realise to be able to maintain it for as long a period as I have done was quite a good effort. But for now, it's all about one game

Having performed consistently without suffering serious injury since moving to London, the former Dulwich College pupil believes he has benefitted from not graduating through a rugby academy.

"From a physical point of view, definitely," he said.

"They push these guys through, they do their weights and everything and they look the party piece, but there is probably a bit more physical development to do.

"The game is getting harder and faster, and when you are thrust onto the stage at 20 or 21, especially in attritional positions, it will take its toll.

"So there is a benefit [in breaking through later], especially if you want to play into your 30s."

Harlequins have only won one of their last 10 meetings with Saracens but Quins go into the match having won their last five Premiership matches.

Easter says beating the Premiership table-toppers to reach the showpiece Twickenham final for the first time since 2012 will rank among the best achievements in his career.

"We haven't got a great record against Saracens - pretty poor actually," he said.

"Considering the setbacks we've had this season, to continue to keep grinding out wins shows great mental strength."