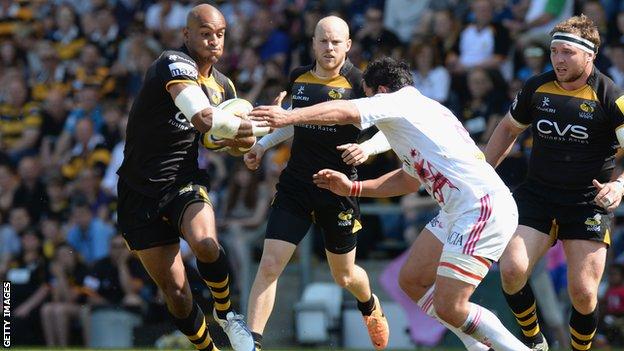 London Wasps will take a one-point lead into the second leg of their European Rugby Champions Cup play-off after defeating Stade Francais.

A last-minute Andy Goode penalty gives Wasps a slender advantage for the return fixture in Paris next Saturday.

Wasps briefly led 27-15 after an hour but the French club hit back with two converted tries to go in front 29-27, as defences tired on a hot afternoon.

However, Wasps mounted one last assault and, when Stade were penalised for offside, Goode, who kicked six out of six, stepped forward to ensure the Premiership side would have the narrowest possible edge for the second leg.

The aggregate winners will clinch the final place in Europe's new top competition next season.

Wasps director of rugby Dai Young: "I always felt we'd have to win both games to go through. I never felt we'd have a huge lead leaving Adams Park to go there and sit back on.

"We showed we can cause them problems in this leg so we'll go to them full of confidence and belief.

"Beating them makes a difference to the psyche - we're 1-0 up.

"We should have been going there with a 10-point lead, but that doesn't change the fact we can go there and win."