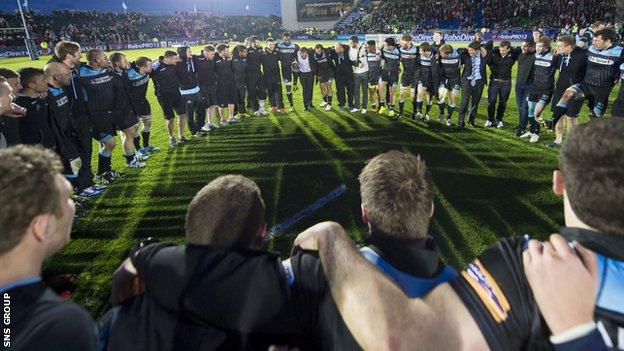 "I think that was one of the best games at this level that I've been involved in," he told BBC Scotland. "It felt like Test-match intensity.

"Munster played outstanding rugby, they were very aggressive at the breakdown and moved the ball from minute one to minute 80.

"We had guys hobbling with cramp at the end with the effort they put in."

Munster scored two tries to Glasgow's one at Scotstoun, but the home side prevailed in a contest that was brutal and tense throughout.

"Munster play a unique style, moving the ball wide to wide and, if you don't stick to your system, if you jump out line, then you'll get picked off," Townsend continued.

"It's a lot of work to go up against that attack. But, if you get it right, you can put them under pressure and tackle them behind the gain line.

"We were almost there at times. We were getting real pace on the ball, but Munster defended really well."

Having lost at this stage in three of the last four seasons, Glasgow reached their first final and they will meet either Leinster or Ulster on 31 May. Gordon Reid plunged over for the Warriors try in the first half, with Finn Russell kicking the rest of the points to make it nine consecutive wins.

"We used all of the bench and the guys that came on did very well," added Townsend, who left Scotland internationals Stuart Hogg and Duncan Weir out of his match-day squad.

"Sean Lamont had to play open-side flanker, Niko (Matawalu) made a couple of great breaks and Leone (Nakarawa) was outstanding.

If Ulster were to win at Leinster on Saturday, Glasgow would have home advantage for the final.

"I'd like to play in Glasgow," said Townsend. "Leinster and Ulster are excellent sides and we've had battles with them both, just like we've had with Munster."

Warriors captain Al Kellock is also hoping for an Ulster victory in Dublin.

"What we could do we did and I'm delighted we have taken that a step further," said the Scotland lock.

"Where the final is played is out of our hands, but I'd love to give these fans another big occasion.

"Some of the stuff we did tonight was top class, but I also believe there are things we can improve - and going into a final, that's great.

"That's nine in a row now and to still have things we can improve on is a great position to be in."