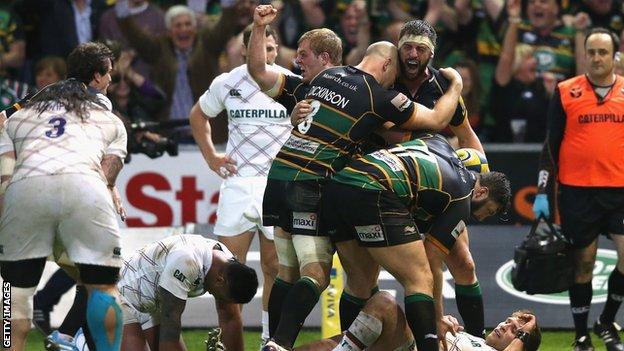 Northampton boss Jim Mallinder insists their long-awaited win over Leicester in the Premiership semi-final is secondary to securing a major trophy.

Saints, who beat Tigers 21-20, lost in the final last year and were Heineken Cup runners-up three years ago.

"A significant moment will be when we win a big competition," Mallinder said.

"We've been in a Heineken Cup final, we were in the Premiership final last season. It will be significant when we win a big one."

They're celebrating like they've won the thing and fair play to them. You have to take it on the chin

Heineken Cup winners in 2000 and Challenge Cup winners five years ago, Northampton have regularly struggled in big, one-off games since, particularly at the Premiership knock-out stage, after reaching the final for the first time 12 months ago following three consecutive semi-final defeats.

But now they have a second chance in as many seasons to claim the league title - and it comes after a thrilling comeback victory over the reigning champions, which ended a nine-game winless run in the Premiership against their East Midlands rivals.

"We've had some great tussles with them over the last few years," said Mallinder, who leads out his side in the Amlin Challenge Cup final against Bath on Friday, before facing either Saracens or Harlequins at Twickenham the following week.

"Hopefully that is going to give us momentum. We've got two finals in two weeks to look forward to. We've got two chances to bring silverware back to the people of Northampton."

Saints will wait to see if prop Salesi Ma'afu will be available for either game, with the Australian facing a ban for the punch on Tom Youngs that saw him sent off.

And there is still doubt over the fitness of England hooker Dylan Hartley, who is expected to return before the end of the season, but is still not taking contact in training because of a recovering shoulder injury.

"It's a strength thing," explained Mallinder He's out there running all the time. The physios are constantly comparing it to the other arm. It has to reach a certain level for them to be happy to take contact."

Leicester and their boss Richard Cockerill, so used to winning at Franklin's Gardens after three consecutive successes there, will be coming to terms with the concept of not being in a Premiership final for the first time in 10 years.

"But next year, with everybody fit and a few bodies coming in, we'll redouble our efforts.

"They're celebrating like they've won the thing and fair play to them. You have to take it on the chin."