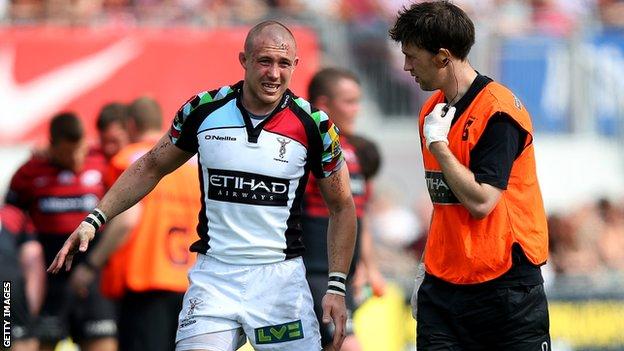 Harlequins are hopeful full-back Mike Brown will be fit for England's first Test against New Zealand after injuring his hamstring in the Premiership semi-final loss to Saracens.

Stuart Lancaster's England face a Barbarians side on 1 June before the first of three Test matches on 7 June.

"But we'll see in the next couple of days and he's got a few weeks before that first Test."

O'Shea added: "The surface is different from what we're used to playing on and it was hot. So it's a twinge, I hope."

Brown, 28, who was the player of the tournament at this year's Six Nations, came off with 14 minutes to go as Quins suffered a 31-17 loss to Saracens.

Lancaster is not able to select Sarries full-back Alex Goode or Northampton's full back Ben Foden for the first Test because of both clubs' involvement in the Premiership final on 31 May.

Meanwhile, O'Shea said Quins props Kyle Sinckler, 21, and Will Collier, 23, are in contention for call-ups.

"Whether you're 35 or you're 21, if you're good enough you are ready. Both Kyle and Will are ready for international rugby," said O'Shea.

"Kyle is a young man with a huge edge, as is Will. We're very lucky to have two great tightheads. Their learning has accelerated and they will be the cornerstone of this Quins team for a long, long time.

"I wouldn't separate the two of them because they are two incredible talents. It's up to Stuart now and it will be interesting."