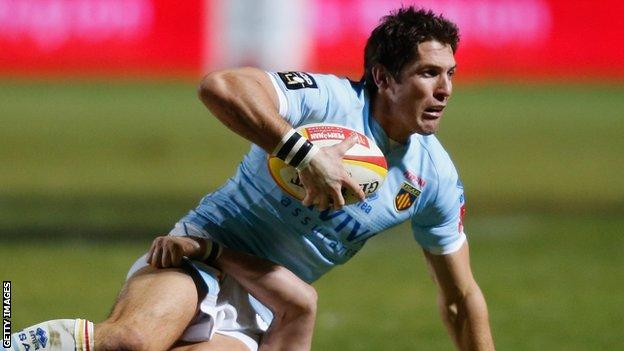 The Ospreys have confirmed they are in talks to re-sign James Hook.

The utility back, 28, who has won 75 Wales caps, left the Liberty Stadium to join Perpignan in July 2011 and signed a four-year extension last September.

But it is thought he has a get-out clause that can be activated after the French club's Top 14 relegation.

However, the Ospreys say any deal would hinge on the regions signing a Rugby Services Agreement with the Welsh Rugby Union.

The WRU and Regional Rugby Wales - the umbrella organisation that represents the Ospreys, Scarlets, Cardiff Blues and Newport Gwent Dragons - are looking to replace their Participation Agreement which expires on 30 June.

The two sides have been in dispute over funding and player release, and a new agreement would clarify the regions' budget for next season.

The Ospreys also hope to agree a new deal with Wales and British and Irish Lions prop Adam Jones, whose future remains undecided despite his current contract with the Ospreys ending this month.

Jones, 33, has won 94 caps and was one of six players whose contracts were due to expire who the WRU made a priority to try and keep in Wales.

He has been at the centre of a contract row between the Ospreys and the Welsh Rugby Union.

Blues, Wales and Lions full-back Leigh Halfpenny is the only one of the six set to leave Wales, having signed a contract to join Toulon for the 2014-15 season.

Rhys Priestland and Scott Williams have agreed new deals with the Scarlets, and Alun Wyn Jones has opted to stay with Ospreys.

Only Welsh captain Sam Warburton has agreed a national contract with the Union.

Ospreys backer Robert Davies told BBC Wales Sport: "[We] can't do anything until a new agreement is signed.

"It would be nice to now sign him [Hook] and Adam as a big positive for Welsh rugby. We'll see."

The future of Hook's fellow Wales international and Perpignan team-mate Luke Charteris, the ex-Dragons lock, has also yet to be settled.

Both Hook and Charteris could yet opt to stay with Perpignan and help them regain Top 14 status, although Hook has been linked with newly promoted Lyon, as well as English sides Gloucester and London Irish.