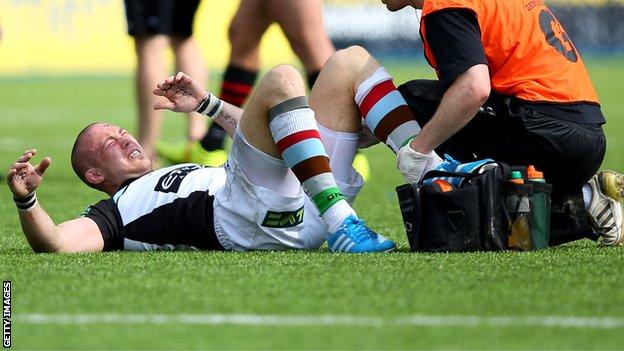 England head coach Stuart Lancaster has added 21 players - 18 from Harlequins and Leicester - to his training squad ahead of the tour to New Zealand.

Full-back Mike Brown is named despite straining a hamstring in Saturday's 31-17 defeat by Saracens and is joined by 10 of his Quins colleagues.

Rob Webber of Bath is also included, while Sale Sharks' James Gaskell and Ross Harrison will join up for the 1 June meeting with the Barbarians.

In addition to established internationals such as captain Chris Robshaw, centre Manu Tuilagi and scrum-half Danny Care, the latest additions include uncapped 21-year-old prop Kyle Sinckler, who enjoyed an outstanding end to the season with Harlequins.

Lancaster is optimistic that in-form Brown will recover quickly and be available to train next week.

However, the news is less promising on Dylan Hartley. The Northampton hooker's shoulder injury is not recovering as quickly as hoped and a decision will be made on his fitness next week.

The head coach will add a further batch of players from Bath and London Wasps following the Amlin Challenge Cup final on 23 May and the European Rugby Champions Cup play-off second leg the following day.

A final group will join the party from Saracens and Northampton Saints after the Aviva Premiership final on 31 May.

The squads for the tour and Barbarians match will be announced on Monday 26 May at 12:00 GMT.

Lancaster said: "We are keen to give the players from Harlequins and Leicester some time away before joining camp and will look to bring them in towards the end of the week.

"We've brought Rob Webber in for further assessment and treatment in order to give him the best possible chance of making the tour to New Zealand.

"James Gaskell and Ross Harrison are rewarded for their development this season and will be joining up in due course in order to prepare for the Barbarians game."

One of the squads will fly to New Zealand on 27 May, with the remainder travelling on 2 June following the Aviva Premiership final and the match against the Barbarians.