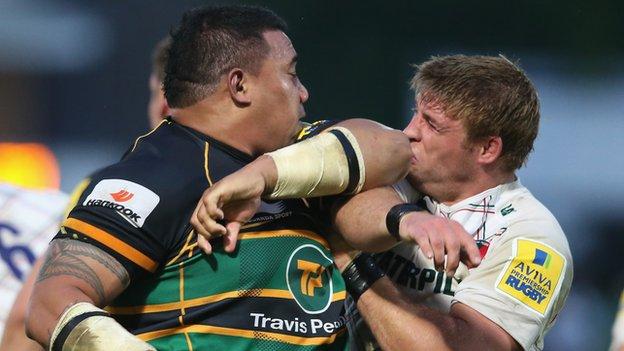 Saints prop Ma'Afu has been charged with striking Tom Youngs after being sent off during his side's 21-20 win.

And Tigers fly-half Williams has been charged with "acts contrary to good sportsmanship/making contact with the eye(s) or eye area of Luther Burrell".

Both will face a Rugby Football Union Disciplinary panel on Tuesday evening.

Any ban could rule our uncapped 22-year-old Williams from contention for Wales' summer tour to South Africa.

The International Rugby Board recommends that anyone found guilty of making illegal contact with the eyes carries suspensions ranging between 12 and 156 weeks.

Williams has been included in the Wales Possibles squad to face the Probables at Liberty Stadium on Friday, 30 May.

But England's clubs have said they will not release any of their players for the trial.

With Rhys Priestland ruled out by injury, Williams is up against 75-cap Perpignan back James Hook, among others, to understudy incumbent Wales fly-half Dan Biggar.