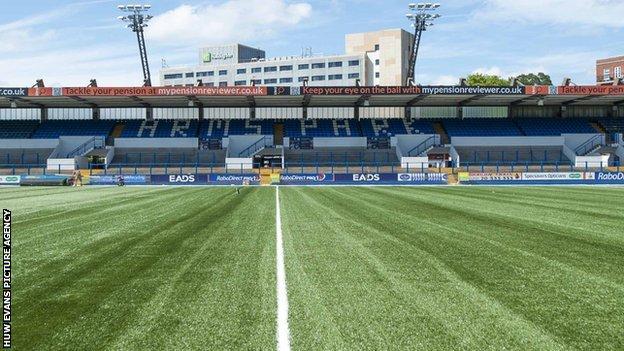 Osprey, Scarlets and Newport Gwent Dragons will have the company's logo on their shirts.

But Blues' shirt sponsorship was not available ahead of the 2014-15 season.

The backing will include community development initiatives.

Dragons and Scarlets will bear the sponsorship on their home and away kits while it will be on Ospreys' home jersey.

Davies, who is also Scarlets chief executive, said: "This is a clear vote of confidence in the Welsh Regions and we are delighted to be working alongside BT, a successful global brand that can see the real value in investing significantly in our regional businesses, our 200 professional players and the rugby development structures we have in place."

Ann Beynon, Director Wales, BT said: "We respect and want to support the passion of the very knowledgeable Welsh rugby communities and applaud the positive and progressive work being done by Regional Rugby Wales (RRW) and those overseeing and working within the four Welsh regions."