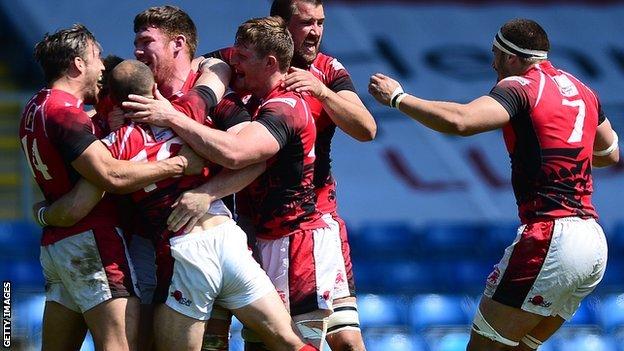 London Welsh boss Justin Burnell has described his side as a "special breed" after they fought back against Leeds to advance to the Championship play-off final against Bristol.

The Exiles were 13 points down on aggregate with 12 minutes remaining of Sunday's semi-final second leg at home.

"In that last 20 minutes we just seemed to get better. There was no panic whatsoever.

"That's what we're about. It's a good mix, we've a couple of northerners in there and a couple of Welsh lads and they've just been brought up to work hard.

"We want success, we want to be a good team, but the only way you'll get that is by rolling the sleeves up and punching your guts out."

Seb Stegmann sparked the Exiles comeback with his converted try on 68 minutes, and when Ollie Stedman crossed three minutes later they were ahead 26-20 and just one point behind on aggregate.

Former Leeds and Scotland fly-half Gordon Ross then slotted the defining penalty with two minutes remaining to send Burnell's side through to the final.

Welsh, in their first season back in the Championship after being relegated from the Premiership last year, now face a two-legged decider against Bristol after they overcame Rotherham 39-25 on aggregate.

The Exiles host Andy Robinson's side at the Kassam Stadium on 28 May, before a return leg a week later at the Memorial Stadium.