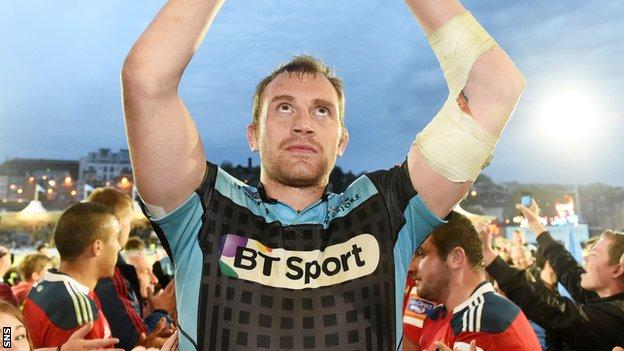 Skipper Al Kellock believes that facing Leinster in Ireland will not hamper Glasgow Warriors' chances of winning the Pro12 final.

Gregor Townsend's side travel to the RDS on 31 May after securing a final berth with victory over Munster.

Warriors lost to Leinster at the same venue in last season's semi-final, but Kellock remains confident.

"We need to be at our best, but we can definitely win it," said the 32-year-old lock.

"We've got to go to RDS and we have mixed memories over there, a couple of semi-finals that haven't gone our way, so hopefully in the final we can get the right result.

"The semi-final against Munster is the first time we've had a home tie in the play-offs, and it was great, but it won't change the way we go and play the game.

It's a final, so there is pressure on everybody. But, if you let the pressure get to you, you don't bring the best out in yourself

"We'll look at Leinster closely, and what we have to try to do to get the win, and we'll go over there like we did in the semi-final last year and give it our very best.

"We were very close to coming away with a result last year and hopefully we'll go one step better."

Kellock admits the bruising 16-15 win over Munster left Glasgow drained but says they will be ready for their first Pro12 final.

He believes mental toughness will play a bigger part in the game than tactics.

"It'll be a long build-up, but I'm pleased we've got that extra week as we had a tough, tough game against Munster," the skipper said.

"Now we have a week to get the bodies right and see what we're going to do at the start of next week."

Glasgow will examine closely those previous games against Leinster.

"We've got to take something from it," he said. "The tactical side of the game won't change hugely - what will change is the emotional side, so we've got to make sure we're ready for that.

"It's a final, so there is pressure on everybody. But, if you let the pressure get to you, you don't bring the best out in yourself.

"We'll focus on making sure we use the pressure to drag out the best performance we've got - and, if that's good enough, we'll get the win.

"Now it's all about one more 80 minutes to give it our absolute all."