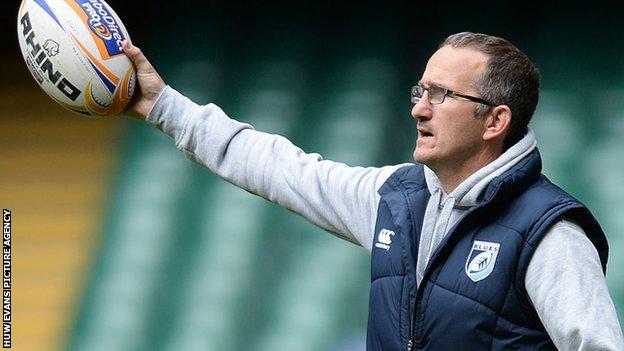 The 41-year-old Hurricanes coach takes over at the Arms Park this summer.

John and McIntosh have been in interim charge of the team since Phil Davies resigned as director of rugby in March.

"Me and 'Chief' [McIntosh] are looking forward to working with Mark and keeping on with the progress we've made," said John.

New Zealand-born, Wales-capped McIntosh joined Blues as an assistant coach ahead of the 2013-14 season.

Blues under John and McIntosh

John arrived as backs coach after Gareth Baber left in December 2013, then joined McIntosh in guiding Blues through the final stages of the season after Davies' departure.

The pair are being kept on as assistants after guiding Blues to four wins in their six matches in charge, including impressive victories over Ulster and Scarlets.

Former All Black Hammett's appointment was confirmed on Sunday, 18 May, though his arrival in Cardiff could be delayed until August if Hurricanes reach the Super Rugby final, which takes place on 2 August.

However, John expects to meet the 29-times capped former hooker in June, when Hammett makes an initial visit to the Welsh capital.

"He's a very, very experienced coach at the highest level and a former All Black, so it's a going to be a positive him coming here," said former Wales scrum-half John.

"We're meeting him, I think, in June when he'll be popping over to have a look at the environment and houses and everything.

"So we'll meet him then and it will be good to have a chat with him and get pre-season organised."

John, who also coaches Welsh Cup and Premiership winners Pontypridd, said he was confident Hammett would quickly get a feel for the region and Welsh rugby and "get his principles in place".

Former Blues flanker Martyn Williams welcomed the appointment of Hammett and the fact that John and McIntosh are being kept on.

"They had to keep Dale McIntosh and Paul John there, I think they've done a fantastic job the last six months," said Williams, who won 100 caps for Wales.

"You don't become a Super XV Rugby coach without being a top-top coach.

"Look at his pedigree - 28 times an All Black, learned his trade at the Crusaders and he's been at the Hurricanes, so fingers-crossed it's going to be a fantastic appointment for the Blues."