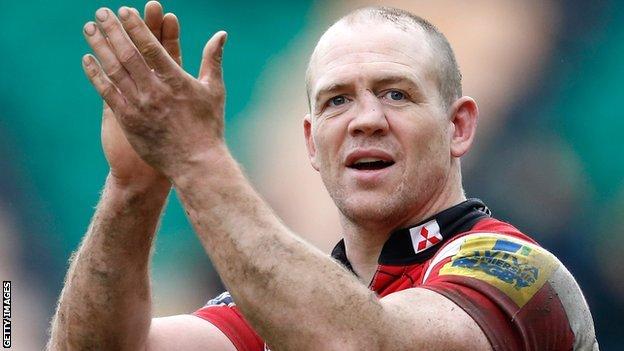 Former England centre Mike Tindall wants to continue his playing career, but only with Gloucester.

The 35-year-old's player-coach deal at Kingsholm expires this summer, but his future is unclear after

I hope rugby isn't going down the line of football with changing coaches a lot. Things just didn't fall into line this year. Is change the right thing?

"The discussion I had with Nigel was that I wanted to play another year, but he thought I should just focus on the coaching side of things," said Tindall.

"So it's up in the air now. But I'm not interested in playing anywhere else."

Tindall won 75 England caps and was a member of the side that won the 2003 Rugby World Cup.

He joined the Cherry and Whites from Bath two years later, and when Davies arrived at Kingsholm in 2012, the three-quarter was

"If a new guy comes in and wants me to keeping playing, I'd say OK," added Tindall.

He has scored 36 tries in 206 top-flight matches

"But if he wanted me to just coach, we'd have to have a discussion.

"The personal drivers I have are reaching 10 years at the club and 200 total appearances."

But this season they struggled to ninth place, and the board decided to part company with the Welshman.

"Nigel put in a lot of work for next year and now someone's going to have to take on a team he's built," added Tindall.

"I hope rugby isn't going down the line of football, with changing coaches a lot.

"Things just didn't fall into line this year. Is change necessarily the right thing? I don't know, that's why I don't make those decisions."