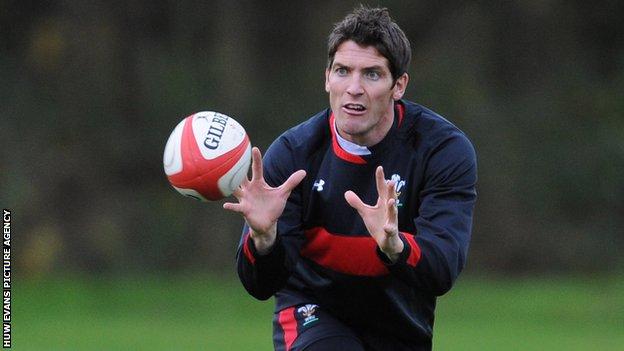 Bristol coach Sean Holley does not think the time is right for James Hook to return to Ospreys.

The Welsh region have confirmed they are in talks to re-sign the 28-year-old utility back after his Perpignan team were relegated from the French Top 14.

Holley would like to see Hook back at Liberty Stadium, but the ex-Ospreys coach believes he has stronger options.

"I'm not so sure that will happen, I think there's a lot of clubs interested in James," Holley said.

James Hook would be a perfect acquisition for someone like Toulon

"James is a fabulous player and it would be great if he did come home.

"If he was to come to Wales then I think it would be right that the Ospreys would be the region that he went to."

Hook, who can play at fly-half, full-back or centre, has won 75 Wales caps and was a call-up to the 2009 British and Irish Lions tour to South Africa.

He left the Liberty Stadium to join Perpignan in July 2011, citing the wish to play regularly at fly-half as a major reason.

Hook impressed for Perpignan, earning many admirers in France, but as at Ospreys and with Wales his versatility ensured he has also played much of his rugby in the French Top 14 at full-back.

The ex-Neath player became the Catalan club's captain and he signed a four-year contract extension in September, 2013.

"He's a talent, he's in the prime of his career, he's in good shape, versatile, kicks goals and when I last spoke to him he'd certainly matured from his experience in France," Holley added.

"I'm not surprised the Ospreys are interested in him. Whether they can afford him and whether James would want to go back at this moment in time would be an issue.

"Obviously he's been playing 10 at Perpignan and [Ospreys fly-half] Daniel Biggar has just won the Pro 12 player of the season and was the highest points scorer yet again.

"If you look at Jonny Wilkinson retiring, Matt Giteau is a little bit long in the tooth, he'd be a perfect acquisition for someone like Toulon."