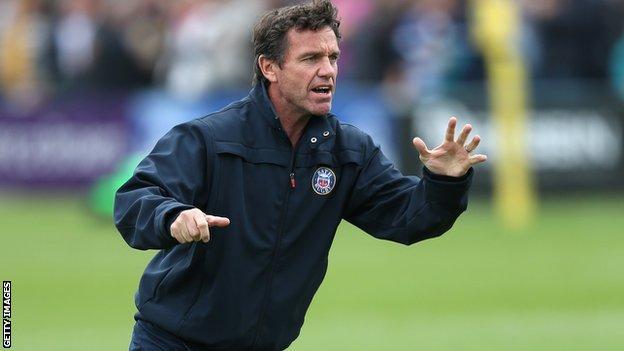 Head coach Mike Ford believes Bath are at an advantage going into the Amlin Challenge Cup final with Northampton, having had two weeks without a match.

The Saints on the other hand, in a bruising Premiership semi-final clash on Friday.

Bath missed out on the top four after a last-ditch on the final day of the regular season.

"In today's game, 10 days is about what you need for players to recover and coaches to do preparation," said Ford.

"So that physical, sapping game for Northampton has to be good for us."

Both the West Country club and Saints have enjoyed recent success in the Amlin Challenge Cup, winning the competition in 2008 and 2009 respectively.

But Northampton may have other priorities when they meet at Cardiff Arms Park.

Their victory over Leicester at Franklin's Gardens came after playing 25 minutes with 14 men, following prop Salesi Ma'afu's sending off.

And, after facing Bath, Jim Mallinder's side will have just eight days before taking on Saracens in the Premiership final.

"To play week in, week out is getting too tough for the players, which is why you need a big squad," Ford told BBC Radio Bristol.

"But we're not falling into the trap of listening to Jim talking about rotation and having one eye on Twickenham the week after.

"Whatever XV they put out will be very good and tough to beat."