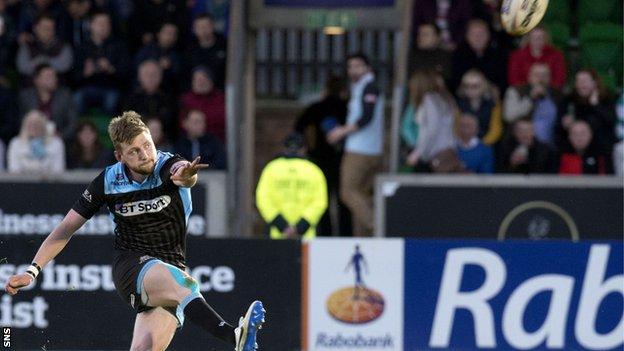 Peter Wright has criticised Scottish Rugby for the summer tour's timing, which means the national side will take on South Africa with a weakened squad.

The final match is against the Springboks on 28 June, out-with the IRB's Regulation Nine window, so clubs do not have to release players.

Richie Gray, Jim Hamilton and Kelly Brown will miss the game as a result.

"Why would you want to go to a bear pit like South Africa with a weaker squad?" asked former Scotland prop Wright.

"I'd have taken a three-game summer tour, not four, and I'd probably not have bothered with South Africa.

"I think what they've done is ludicrous over the summer, to take four internationals on at this time of the season."

"It probably tells you that Al Kellock is coming to the end of his international career if they're not selecting him, unfortunately, to go on any of the tours

The first is for matches against USA and Canada and the second is for games against Argentina and South Africa, due to the IRB window coming into effect.

"For me, international rugby is about winning, getting into that habit," Wright added.

"If we are going to win the World Cup as the SRU keep saying, they have to get into the habit of winning games.

"USA and Canada are definitely winnable. Argentina becomes harder because of the players not going.

"And then you have to go to South Africa for the last game when guys are potentially going to be shattered because of the long season.

"They will be looking for performance with Vern Cotter in as the new coach, but results would be good as well."

Wright believes the absence of Glasgow Warriors skipper Al Kellock from both squads means his time as an international could be nearing an end.

"There's no John Barclay or Al Kellock, there's a bit of experience you might have wanted to go down the road with, but a lot of good young players - Alex Allan, Finn Russell, so it's an interesting squad," he added.

"It probably tells you that Al Kellock is coming to the end of his international career if they're not selecting him, unfortunately, to go on any of the tours.

"I think the positives are Finn Russell, Alex Allan, Gordon Reid, Grayson Hart, so there are going to be a lot of young players getting game time."