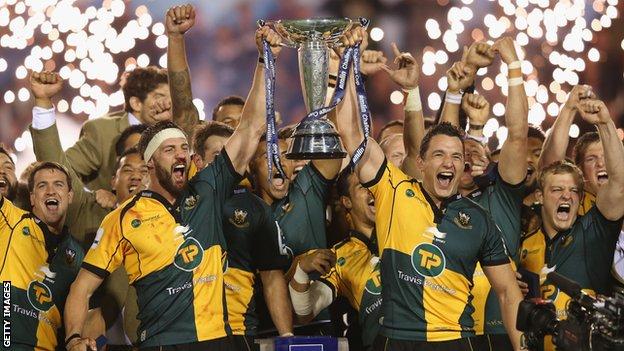 England fly-half Myler scored 20 of his side's points from the boot as Saints recovered from a seven-point half-time deficit.

Anthony Watson's breakaway try had Mike Ford's side up at the break.

But Myler's precision and scores from Phil Dowson and Ben Foden extended Bath's six-year wait for a trophy.

It caps a miserable end to the season for Ford's men, who missed out on the Premiership play-offs with a final-round loss to Harlequins and have not won any silverware since lifting this trophy in 2008.

Saints, on the other hand, have now brushed off the weight of having lost four consecutive finals and face Heineken Cup finalists Saracens in next week's Premiership showdown, with both sides looking for a European and domestic double.

No more final woe for Saints

Bath's George Ford, who is now expected to undergo shoulder surgery that will rule him out of England's summer tour to New Zealand, summed up his side's display with a supreme kicking performance in the first half in front of national coach Stuart Lancaster, but faded away in a difficult second period.

Instead it was England team-mate Myler, who will not be available for the first Test against the Kiwis because of his involvement in the Premiership final, who won the battle of the 10s.

Ford set the standard from the tee moments after kick-off, slotting over a penalty from the halfway line, and added another, with his opposite number putting over two of his own.

Both sides came close in pursuit of the first try, as a Bath catch and drive was halted just shy of the line and at the other end Alex Corbisiero, making his first start since October after an injury lay-off, almost capitalised on a stray Nick Abendanon pass.

The breakthrough in a sedate first half finally came when sustained Saints pressure ended as Jonathan Joseph caught Ken Pisi in the Bath half and Watson, collecting the loose ball, charged 60m to touch down, before Ford converted.

Ford showed the signs of the difficulties to come, though, putting a penalty wide before the break and then, when Corbisiero was sin-binned for tackling after the ball had gone, he slipped another the wrong side of the posts.

Myler though did not pass up three more attempts from the tee with the third, which put Saints in front for the first time, coming when Ford had team-mate Abendanon in trouble with an awkward pass that saw the full-back knock-on.

It seemed Bath were finding every conceivable way to commit an infringement and, on this occasion at scrum time, were penalised again to once more add points to Myler's personal tally, although Ford finally found the space between the sticks after three successive wayward efforts.

Saints soon pulled away when, with Anthony Perenise in the bin, Dowson finished off a driving maul, before Foden eventually touched down a counter after Luther Burrell almost turned down the opportunity.

Myler fell short of a perfect night by missing one of the two conversions, but Jim Mallinder's side finished comfortably to win their first trophy since 2010.

Northampton Saints director of rugby Jim Mallinder: "We had a game-plan that we wanted to move their front-five around the field.

"They were very physical, but we knew if we kept playing, then the opportunities would come.

"Stephen kicked his goals - you have got to take your points in games like this. Unfortunately for George Ford, he missed a few at a crucial time.

"We know we are improving as a team. We are a better team than what we were last year. We are pleased with the way things are going."

Bath head coach Mike Ford: "We had to take our opportunities when they were on offer, and we missed a couple. Myler picked us off.

"Maybe at a crucial time the inner belief you get from winning big games and trophies just wasn't quite there because we have got no recent history of that.

"We are proud of what we have done this season. We are not going to change our philosophy.