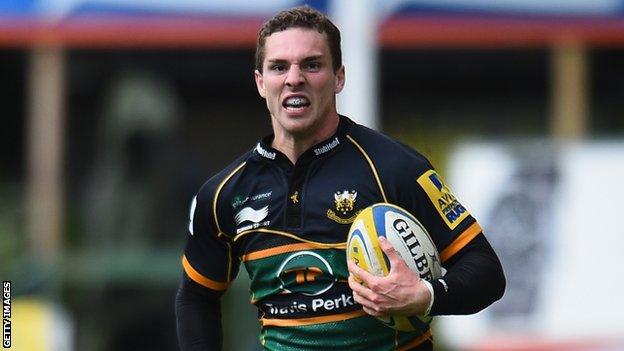 Wing George North insists he wants to play a full part in Northampton's quest for silverware in the next two weeks.

Saints face Bath in the Amlin Challenge Cup final on Friday, and then take on Saracens at Twickenham in the Premiership final a week later.

North, 22, told BBC Radio Northampton: "Anyone who doesn't get excited or doesn't want to play in a final shouldn't be anywhere near the game.

"I came here to be part of a winning squad and to win some silverware."

He added: "Hopefully I've done enough to put my hand up to be involved in these two finals."

"The atmosphere was something I've never experienced at club level," he said. "It will stay with me forever.

"It's been a long season but these are the games you want to play in."

The former Scarlets man is set to miss the Wales Probables v Possibles match on 30 May as a result of Saints' progress in both competitions.

A spokesperson for England's Premiership clubs has said that because the game is not a Test match they do not have to release non-English players.

But North is hoping to feature in Cardiff later this week, as Northampton bid for their first major trophy since 2010 when they take on Bath.

"I've never played at Cardiff Arms Park, so it'll be good," said North. "It's nice to go back to Wales - it's never a bad thing to go back home, and it's going to be a different challenge.

"To play away against Bath is tough but it's the start of a big two weeks. Regardless of how you're feeling, you've got to step up now."

Although North toured Australia with the British & Irish Lions and played for Wales in the Six Nations, giving him limited time off prior to joining Saints, the wing denies that he is feeling tired ahead of the matches to come.

"You buy Welsh and it's robust, you see," he said.

"It's been almost a two-year season for me but these are the days that you dig in for, like in the dark months of December, when it's raining hard and you can't feel your hands."