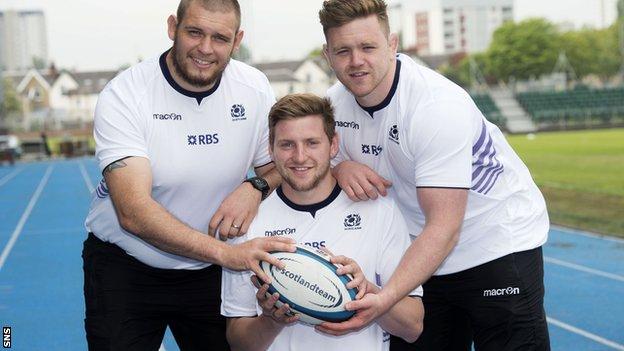 Kevin Bryce was shocked to find himself named in Scotland's summer tour squad after having only made two substitute appearances in professional rugby.

The 25-year-old hooker joined Glasgow Warriors last season and was sent out on loan to London Irish in December.

But now he is among six uncapped players in Vern Cotter's first squad as Scotland head coach.

"I am pretty gobsmacked to be honest," Bryce told BBC Scotland. "I didn't expect it at all."

It's been a whirlwind, especially because, two months ago, I was playing with Ayr

Bryce, who spent most the season with Heriot's in the Scottish Premiership, does not expect to be even on the bench when Warriors face Leinster in the Pro12 final later this month.

Having moved to Warriors from Stirling County, the former winner of the John Macphail Scholarship, which earned him a summer playing club rugby in New Zealand, still finds himself behind Scotland hookers Dougie Hall and Pat McArthur at Scotstoun.

Yet he is one of only nine out of 43 players chosen in both Scotland squads - one to face the United States and Canada and the other to take on Argentina and South Africa.

"I have only played two games off the bench for Glasgow, but I must have done something - all my hard work for Heriot's maybe," Bryce told BBC Scotland.

"My last game was for Caley Reds against Newcastle Falcons about two weeks ago. If you had told me after that that I would be in the Scotland squad, I would have said you are having a laugh.

"It will be a tough test. I can compare myself to other hookers from around the world, so I'm looking forward to it."

Prop Reid's call-up follows a couple of vital tries that have helped Glasgow reach that final in Dublin and he is excited at the prospect of playing under the New Zealander who has taken charge at the end of his spell as Clermont coach.

"I hear he is a really good coach," said the 27-year-old. "Some of the players I know have spoken about him and can't speak any higher of him. Hopefully, it is the start of something good.

"It has been a good season for Glasgow and obviously that puts my hat in the ring for Scotland.

"You don't expect it and to get the call is absolutely unbelievable."

Russell has only started winning regular games with Glasgow and finds his call-up "surreal".

"It's been a whirlwind, especially because, two months ago, I was playing with Ayr," said the 21-year-old. "To be hopefully playing in the final and going on the summer tour, it's crazy.

"It feels amazing to have the chance to play for Scotland. It is huge to be involved in the summer tour, especially with the World Cup next year and to have that chance.

"It is a big squad and they will taking a few younger players like myself for experience, but I am just going to go out there and learn from it and, if I am lucky enough to get a cap, that will be a bonus."