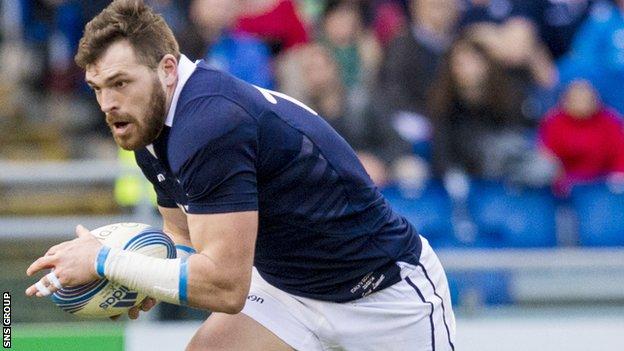 Scotland have named international wingers Sean Lamont and Tommy Seymour in their sevens squad for this summer's Commonwealth Games in Glasgow.

Lamont, capped 86 times and a member of the 2002 Games squad in Manchester, returns to the short-format game for the first time since 2009.

The Glasgow 2014 tournament will be played at Ibrox Stadium over the weekend of 26 and 27 July, with Scotland in the same group as gold medal favourites New Zealand, Canada and Barbados.

Lee Jones, recently released by Edinburgh, is another winger with full Scotland honours and played in the recent Glasgow leg of the World Sevens Series, with the hosts reaching the semi-finals.

Vernon, Eddie and Wight also played at Scotstoun this month as Scotland beat Australia and South Africa on their way to the last four, where they lost out to fast-improving Canada.

"I have selected a group of players that can be successful at a home games," said head coach Stephen Gemmell.

"The balance of players I have opted for is the strongest combination available to me.

"Tommy is a proven finisher at professional and international level. He has a very good all-round skill set. He is a strong defender, good with ball in the air and he always challenges the opposition defence. He will definitely add value to this group.

"Sean is a significantly capped international winger, he came through sevens, he has played in a previous Commonwealth Games and he helped Scotland reach the Cup semi-final in Murrayfield in 2009.

"He is one of a number of Glasgow Warriors players who come in from a successful environment at Scotstoun, which will be very positive for us.

"Roddy has cut his teeth in Sevens. He brings a wealth of experience, he has previously captained the side and he has had a good season at Edinburgh."

Seymour and Lamont were named in new Scotland coach Vern Cotter's first senior squad on Tuesday, with the latter chosen for the Tests against USA and Canada and Seymour selected for the summer clashes with Argentina and South Africa.

Scotland's Sevens finished sixth at the Delhi Games in 2010.