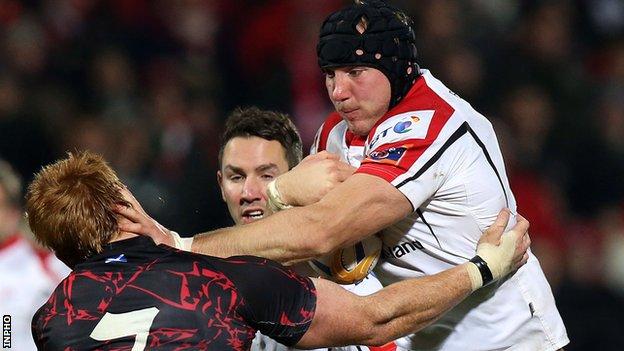 Representatives of injured Ireland star Stephen Ferris have said a decision on the player's future will have to be made soon.

The Ulster flanker has been dogged by injuries and missed most of the season with an ongoing ankle problem.

"There are still ongoing tests on the ankle," said his management company.

"Having not played for a number of weeks, and not going on Ireland's tour, decisions will have be made very soon on the best move forward for Stephen."

Speculation has been mounting in recent weeks that the 28-year-old's glittering playing career could be over.

He did make a comeback in March after being out of action for 16 months because of the ankle injury sustained in a match against Edinburgh in November 2012.

Ferris received a rousing ovation from the Ravenhill crowd when coming on as a replacement against the Scarlets, and the roars became even louder within seconds when the British and Irish Lions star made a powerful, trademark challenge.

The forward played in further Pro12 fixtures against Edinburgh and Cardiff and the Heineken Cup quarter-final defeat by Saracens.

However, a recurrence of his ankle problem saw Ferris miss the rest of the season.

Ferris has made 100 appearances for Ulster and the last of his 35 Ireland caps came in the Six Nations game against England in 2012.