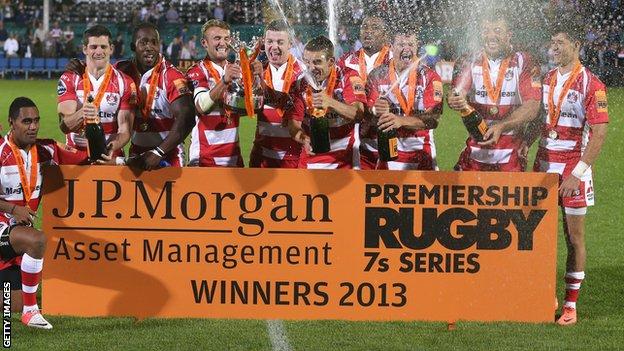 The four Welsh regions will compete in the Premiership Rugby Sevens Series.

The top two regions will qualify for the Series Final at the Twickenham Stoop on 8 August.

"The regions have never played each other in a Sevens tournament before," said Mark Davies, the acting chief executive of Regional Rugby Wales.

"So there is a lot of pride at stake, as well as the opportunity of a place in the Series Final and the chance to be part of... the World Club Sevens at Twickenham in August."

The winner of the Premiership Rugby Sevens Series will go on to play in the World Club Sevens on 16 and 17 August at Twickenham.

The other three pools contain the 12 Aviva Premiership clubs, split along geographical lines.

Completing the group stages on 2 August at Kingston Park, Newcastle, Leicester Tigers, Sale Sharks and Worcester Warriors will battle it out in Group D.

Davies added: "Having announced our exciting three-year sponsorship agreement with BT Sport this week as well, it shows we have a positive partnership that will go forward between BT Sport and our four Welsh regions.

"We know for sure that Anglo-Welsh rugby contests ignite plenty of excitement and passion amongst our supporters and we hope our involvement will add a real edge to the event."

Gloucester are the defending champions, having won the Premiership Rugby Sevens by beating Leicester in the 2013 final.