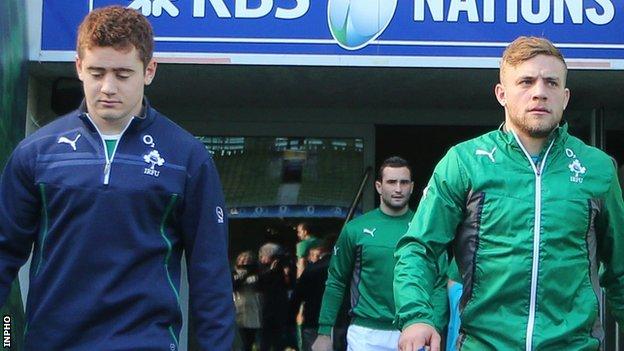 Ulster fly-half Paddy Jackson has been ruled out of Ireland's forthcoming two-Test tour of Argentina with a stress fracture in his lower back.

Jackson came off after 56 minutes of Ulster's Pro12 semi-final play-off defeat by Leinster at the RDS.

The Irish Rugby Football Union said in a statement the 22-year-old will require rest and recuperation as he bids to be fit for next season.

Leinster's Ian Madigan, 25, has been named as Jackson's replacement.

Ireland coach Joe Schmidt announced a 30-man squad for the tour on Monday, with Leinster winger Dave Kearney already ruled out after injuring a knee.

Ulster back Tommy Bowe is being rested after an injury-plagued season, while Leinster centre Gordon D'Arcy is also absent.

The squad will fly out on Sunday, 1 June, with the first Test in Resistencia, in the north-east of Argentina, six days later.