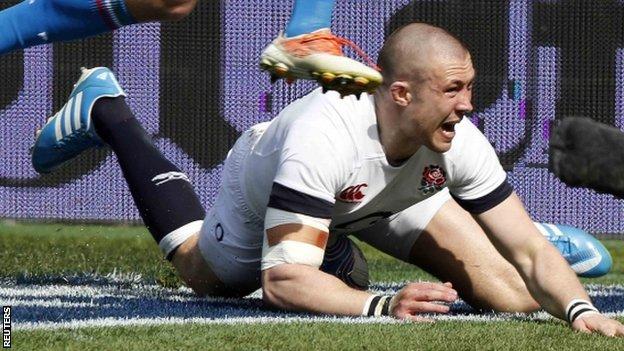 Harlequins full-back Mike Brown has given England some positive injury news by saying he will be fit for the first Test against New Zealand on 7 June.

The 28-year-old is recovering well from a hip injury sustained during last Saturday's defeat by Saracens.

"It's feeling good," said Brown. "On Monday I'll be ready to train and it's looking good for the first Test."

His inclusion comes with Bath fly-half George Ford expected to miss the summer tour with a shoulder injury.

He is likely to have surgery after after Bath's Challenge Cup final against Northampton on Friday.

Ford, 21, was in line to make his first England start in the first Test against the All Blacks.

In his absence Freddie Burns of Gloucester and Sale's Danny Cipriani will compete for the number 10 shirt in Auckland.

Both Owen Farrell and Stephen Myler will miss the first Test on 7 June because of their involvement in the Premiership final the previous weekend.

England face the Barbarians on 1 June at Twickenham before heading to New Zealand for a three-Test series.