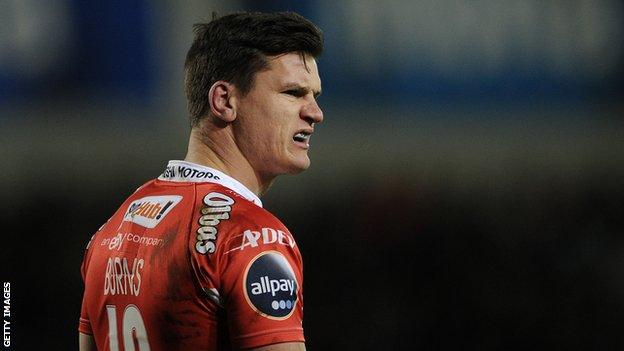 The 24-year-old England international moves to Welford Road as a replacement for Toulouse-bound Toby Flood.

Freddie Burns kicked two penalties on his England debut against New Zealand, a 38-21 win, and has 37 points from his three caps

Bai will compete for the Tigers number 10 shirt alongside Owen Williams and Burns, who scored 986 points in 134 appearances for Gloucester and will be looking to add to his three England caps on this summer's tour of New Zealand.

"Everyone wants young English players,," Cockerill told BBC Radio Leicester. "Well, I've got one of the hottest talents at 10 in the English game.

Burns's departure from Gloucester, where he came through the youth ranks, was confirmed in January after he was linked with the Tigers.

Along with Owen Williams, he'll be really good for us. He's come to fight for his spot and if he plays better than Owen, he'll play

"He's had a difficult season for lots of reasons and he's got a little bit of adjusting to do, getting used to what we do and learning that it's about the team and not the individual, but he's a fantastic player, a fantastic talent," said Cockerill.

"Along with Owen Williams, he'll be really good for us. He's come to fight for his spot and if he plays better than Owen, he'll play."

Ghiraldini, and Canadian-born Barbieri, both 29, are Italy internationals, while Tonga-born Loamanu, 28, has played for Japan and they will increase competition for places as Leicester rebuild after missing out on the Premiership final for the first time since 2004.

Contract details of all four players have yet to be disclosed by the club.