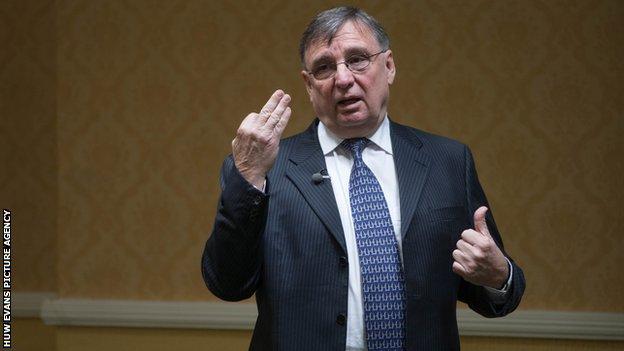 The Welsh Rugby Union's extraordinary general meeting will be held in Port Talbot on Sunday, 15 June.

Ex-WRU chief Moffett is seeking election to the governing body, and 43 clubs, including the four professional regions, have apparently made valid applications for the meeting.

A no confidence vote at an EGM could force out elected members.

If passed it would give Moffett the chance to return to the union in a different role.

Each member club will have two votes, which can be submitted in person at the meeting at the Princess Royal Theatre or by proxy by using one of the official forms. The proxy form must reach the WRU by 1100 BST on 13 June.

"It is vitally important to the future of rugby in Wales that those Member Clubs available to attend do so or, for those that can't be there in person, votes are cast using the proxy forms which have been made widely available," said WRU chief executive Roger Lewis.

"We know that those 43 Member Clubs who called for the meeting will be keen to debate the relevant issues, but we need to ensure that all clubs enter the discussion by either attending or submitting their vote via a proxy form."

When New Zealander Moffett claimed enough support from member clubs to call for the gathering on 22 May the WRU released a statement that said: "The WRU welcomes the opportunity to address the issues raised by the clubs through an open and well informed debate.

"The proposed league restructure appears to be the primary issue in the nomination letters. The WRU is determined to provide all the information the 43 member clubs require within the EGM forum.

"Under the constitution of the WRU the governing body will give member clubs notice of an EGM within 21 days ensuring that date gives clubs a reasonable time to brief delegates to attend on their behalf.

"The meeting itself will take place no later than 28 days after the clubs are informed of the date and venue."

Moffett, WRU chief executive between 2002 and 2005 and a former head of Regional Rugby Wales, was responsible for the move to regional rugby.

He has been critical of how the union is run and in January said he was going to return to Wales and bid for a seat on the WRU board.

In March he presented a 17-point manifesto which proposed more money for grassroots rugby, a better relationship with the regions and to renegotiate the WRU's debt.

The WRU has previously pointed to the success of the national side, and its financial record.

And in April, the Welsh Rugby Union announced a multi-million pound boost in investment into both the community and professional game in Wales, with WRU chief Roger Lewis saying: "Our stated priorities are the wellbeing of elite and community rugby."

Meanwhile, Moffett said an EGM would not be an attempt to get approval for his manifesto.

"If the changes contemplated in the EGM are carried, the clubs will be fully consulted and have the final vote on any proposals put forward by a new board on any aspect of the governance and management of the WRU," Moffett added.