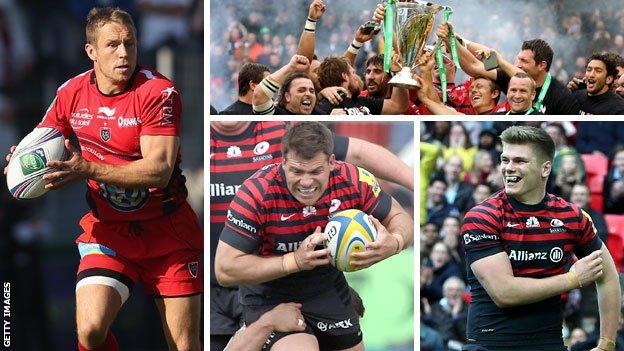 Saracens will bid to become champions of Europe for the first time when they face holders Toulon in Cardiff on Saturday in the last Heineken Cup final.

It will be Jonny Wilkinson's last appearance on British soil before he retires, and the 2003 World Cup winner's contest with current England 10 Owen Farrell could be the defining battle.

I played in the Bath side that became the first English team to win the tournament when we beat Brive in 1998.

Here's what it takes to win the Heineken Cup, which will be replaced by the European Rugby Champions Cup next season, and how I rate Saracens' chances of becoming the fifth champions from English shores.

'Playing in the final was such a buzz'

It had been a strange season for me in 1997-98 because I ruptured a disc in my back and had to have an operation, but I came out of hospital and within two weeks was playing in the final.

*Record for a Heineken Cup season

Coming from Bath, which is rugby mad, everyone was talking about the game and the city moved en masse to Bordeaux - some groups even hired planes.

French teams had won both previous finals, Brive were the defending champions and we were in France, so pretty much everything was against us.

But when we arrived in Bordeaux there was blue, black and white - the colours of Bath - everywhere and there was such a buzz leading up to it.

We'd had a massive night at an awards dinner in London a few days before the final - it was the good old days - but it didn't affect us because we were on such a high.

The atmosphere was amazing. The ground was full of flags - it was the first time I'd seen that - and the noise was incredible.

It was like the European football finals I'd watched on TV and a bit different to our normal vibe.

Remember rugby union had only gone professional in 1995 and this was just the third final. It was electric; I got a real high from that atmosphere.

Setting up the match-turning try

We were under the cosh and for most of the game it didn't look like we were going to win, but Brive's Christophe Lamaison missed a couple of drop-goal attempts and we had a bit of good fortune.

We were trailing 15-6 when we scored a try in the second half to get back into the game but we only took the lead for the first time in injury time.

I made the pass that sent Jon Callard over to score our try. It was a massive decision for me because I'm pretty sure I could have made the line.

It was instinctive for me to want to score tries, but it was far simpler for me to pass it to JC to walk it in.

Admittedly he, along with a lot of the guys, was probably shocked I passed.

But it was such a vital score and I couldn't have lived with the humiliation if I hadn't made it.

It's the only pass I ever made that I remember in slow motion.

I don't think of it often but when I'm prompted to do so I can remember it with such clarity.

I had played in Twickenham finals before but this was every bit as special and to win a game we struggled in for so long was like a dream.

Inside the 'cult of Saracens'

"Saracens players have sunned themselves in Rimini, hung out in Miami, hit the ski slopes in Switzerland and returned to Munich for a second stay at Oktoberfest - all while their rivals are slogging it out on the training field."

Read more on their route to the top

When the final whistle went we all started running towards halfway, where the subs and coaches were, and started celebrating - it just went wild.

There was lots of champagne in the changing room and we were late to the reception.

By the time we got there the nibbles had all gone so on the way to the bar we'd hired for a celebration party we had to stop off at a fast food place to get some food.

There were loads of supporters at the bar and we just got on with it and celebrated like it was the end of the season - even though it was only January.

We only won by one point in 1998 but that's not uncommon in finals and there's a good chance it could come down to the boot of Jonny Wilkinson or Owen Farrell to decide the destination of this year's silverware.

Jonny's trademark is his attention to detail, his professionalism, his big defence and kicking the goals.

Farrell has some of those qualities, but no fly-half can match Jonny's intensity and hitting ability in defence; in his prime he hit harder than most forwards.

Farrell, who is only 22, has an edgier temperament but it works for him and, although neither are the best at making breaks, both have improved in that department.

If I were Farrell and wanted to get one over on my opposite number it would have to be by making a break past Wilkinson. That's the biggest statement he could make.

This year Farrell has moved away from being fairly static and standing way behind the gain line - he now plays closer to the opposition defence and is distributing well.

He has not looked back since England beat New Zealand 18 months ago and he's improved again this season. In terms of directing his backline, the Six Nations was a major step in the right direction.

Jonny still kicks a lot, and his breaks are rarer than hens' teeth, but he jinks well and can beat defenders.

Two years ago Clermont beat Saracens and last year Toulon knocked them out, but Sarries smashed Clermont in the semi-finals this year and will be hoping to get revenge on Toulon as well.

One lesson they will have to have learned is not to give away penalties that Wilkinson can knock over, and I think they are smart enough to play a territorial game and not get penalised by the referee in their own half.

They have a great line of defence and pick the right moment to pounce and turn the ball over.

They will be really pleased captain Steve Borthwick has passed a fitness test because teams need a commander.

Jacques Burger is an exceptional defender. He's a confrontational, gladiatorial type of player who will look to dominate the collision.

He made an astonishing 27 tackles in the semi-final win over Clermont, but he's got to be careful.

The Namibia flanker is a workaholic but he can give away penalties and the last thing Sarries want is him being sin-binned for a high tackle.

Their other star from southern Africa, Springbok hooker Schalk Brits, is just one of those gifted players who is bound to have an impact.

Been there, done that, got the T-shirt

Toulon are a who's who of world rugby but they have also turned themselves into something truly amazing.

I was sceptical that you could just throw these big-name players together but I underestimated the influence of Jonny Wilkinson.

Winger Bryan Habana is bidding to join Toulon and South Africa team-mates Bakkies Botha and Danie Rossouw as the fourth man to have won a World Cup, Super Rugby and Heineken Cup (former All Blacks and Leinster lock Brad Thorn is the other).

And there's a strong English influence too with Delon Armitage and brother Steffon set to start alongside Wilkinson.

The defending champions are proven winners, led by Wilkinson, but there is no doubt he has been helped by the on-pitch relationship he has forged with former Wallaby back Matt Giteau.

Wilkinson has never been one to open up defences and was at his best when he had creative players like Will Greenwood and Mike Catt inside him.

He has found another accomplice in Giteau, who is the sort of player who can make something out of nothing with an electric break.

He makes good use of space and if he's in trouble he can always pass it to Mathieu Bastareau. The 18-stone France centre is a pretty handy man to have on your shoulder.

Wilkinson would be the first to say the final is not about him but is about whether Toulon can become only the third to team - after Leicester and Leinster - to defend the Heineken Cup.

Having said that, it is likely to come down to a solitary kick and that means either Wilkinson or Farrell, the past and present of England fly-halves, are likely to be the match winners.