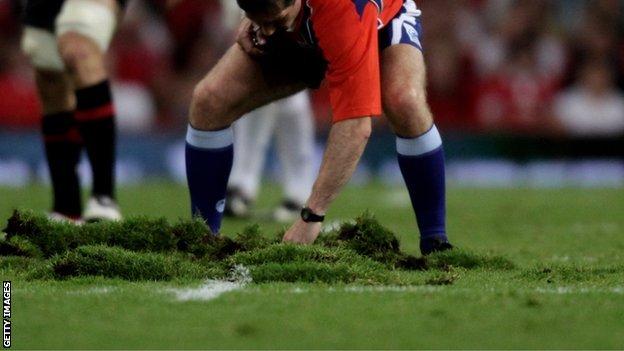 The Welsh Rugby Union is to install a new hybrid pitch at the Millennium Stadium this summer.

Saturday's Heineken Cup final between Saracens and Toulon will be the last game played on the grass surface.

Desso is a hybrid system... and is now considered to be a very successful, tried-and-tested, pitch system at stadia all over the world

The system is also used at Cardiff City's home ground.

Welsh Rugby Union chief executive Roger Lewis announced in December, 2013 the new pitch was the preferred option and they sought financial support for a project with a potential cost of £3.3m.

Since the Millennium Stadium opened in 1999 there have been problems with the original palletised grass surface.

At present, the pitch is grown elsewhere before being moved to the stadium and laid on pallets.

The surface had to be replaced in 2009 because of a fly infestation which caused damage to root growth.

Wales and British and Irish Lions full-back Leigh Halfpenny spoke out about the condition of the stadium's playing surface after they were beaten by New Zealand in 2009.

Unlike the fully artificial surface at neighbouring Cardiff Arms Park where region Cardiff Blues play, the new system is approved by Fifa and Uefa for football matches.

The Millennium Stadium pitch will also include a Terraplas cover to protect the new surface when non-rugby events such as rock concerts take place at the stadium.

Williams added: "Desso is a hybrid system and is now considered to be a very successful, tried-and-tested, pitch system at stadia all over the world."

It will be installed in time for Wales' November Tests and be used for the 2015 Six Nations and eight 2015 Rugby World Cup games that take place there.