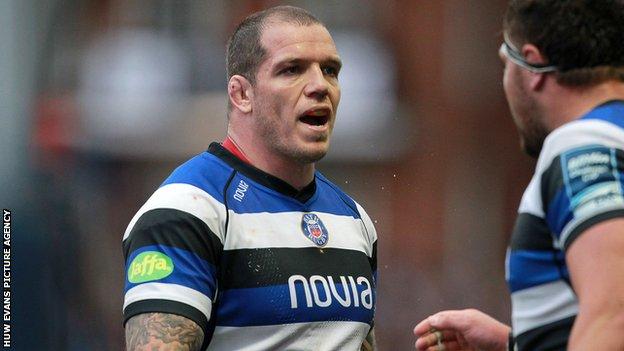 Prop Paul James says he could miss out on a place in Wales' squad for the tour to South Africa if he does not play in the senior trial match.

Bath's James, 32, has been included in the Possibles squad for the game against the Probables in Swansea.

But England's leading clubs will not allow their Welsh players to take part in the trial match.

"If there's a trial going on and you're not playing in it, of course you're going to be under threat," he said.

The trial match at the Liberty Stadium will help decide who is included in Warren Gatland's final squad for the two-Test tour to South Africa in June.

A total of 52 players have been split between the two squads with six of those players based in England and a further five playing for French clubs.

There has been no definite indication yet whether Welsh-qualified players at French clubs will be available for the trial match, the first to be held by Wales for 14 years.

But a spokesperson for England's Premiership clubs said that because the game is not a Test match they do not have to release non-England players.

James, who has won 53 caps, made five appearances during Wales' 2014 Six Nations matches, coming off the bench in four matches.

The former Ospreys prop, who played in Bath's Amlin Challenge Cup defeat by Northampton in Cardiff, is worried he could miss out on a tour spot by not playing in the trial match.

"I've spoken with Possibles coach Robin McBryde but if boys play in the trial and play well then obviously it's going to jeopardise my position," James added.

"It's out of my hands and I can't do nothing about it. All I can do is sit back, wait and see what happens.

"There's no better place to go than South Africa to test yourself as an international.

"If they're picking a team on form and picking a squad on form hopefully I will be all right."