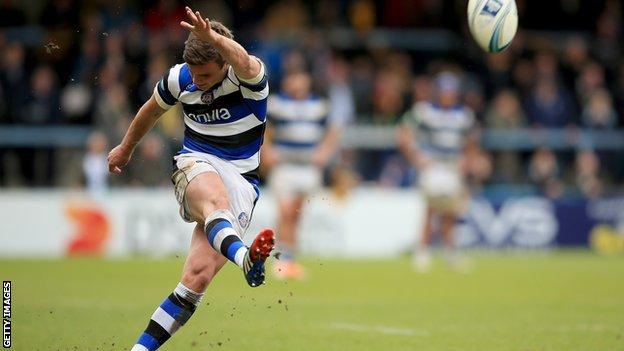 The Bath number 10, who has two caps, was in line to start the first Test against the All Blacks on 7 June.

But coach and father Mike Ford confirmed after Friday's Challenge Cup defeat by Northampton that the 21-year-old would not be available.

However, England may be boosted by the return of Saints hooker Dylan Hartley from a shoulder problem.

George and the golden boot

Bath fly-half George Ford, pictured with coach and father Mike, picked up the golden boot award for the 2013-14 Premiership season.

But there was further concern for England head coach Stuart Lancaster as Saracens director of rugby Mark McCall revealed Mako Vunipola could also be a doubt for the New Zealand tour after the loose-head prop was forced off with a knee injury 15 minutes from the end of their Heineken Cup final defeat by Toulon.

Fly-half Owen Farrell may be a doubt for the Premiership final with an ankle injury picked up tripping over some wire in the warm-up in Cardiff, but should still be available for England's final two Tests in New Zealand.

Hartley, 28, has been out of action since March but has returned to contact training and could feature for his club in the Premiership final against Saracens next weekend.

"He's improved again and trained with the non-matchday 23 and is doing everything that they've done," said Saints director of rugby Jim Mallinder.

Lancaster will need to make a late decision on whether 55-cap Hartley can join the team in New Zealand, with the final squad announced on Monday.

In Ford's absence, Leicester-bound Freddie Burns and Sale's Danny Cipriani will now battle for a starting berth at fly-half.

Speaking about his son's surgery, Bath head coach Ford said: "We took advice from the medics at both Bath and England.

"It was decided that while he can get through this last game, he'll need an operation to start next season well.

"It's a big season with the World Cup coming, so it's the right decision for George.

"He was down for a couple of days but realised it's the best thing for him," the former England defence coach added. "The last thing he needs is for his shoulder to go early next season.

"It's right for him to have the operation straight after the final and get strong for next season."