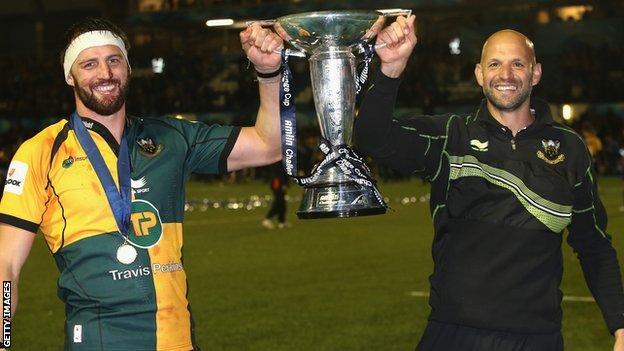 Northampton director of rugby Jim Mallinder believes his side have the confidence to win the Premiership after their Amlin Challenge Cup triumph.

Saints ended a run of four defeats in finals with victory over Bath on Friday and face Saracens in next week's Twickenham showpiece.

"We've been disappointed to lose in recent finals but we know we're improving as a team,' said Mallinder.

"It gives us a massive chance now of winning the Premiership."

Saints' previous trophy success came in the LV= Cup in 2010, since then they have lost a Heineken Cup final in 2011, last year's Premiership final and LV= Cup finals this year and in 2012.

Last week's Premiership semi win over Leicester Tigers appeared to be a significant turning point for the Franklin's Gardens side, as they ended a nine-game run of league defeats by their East Midlands rivals and vanquished their loss in last year's final.

"We're a better team than what we were last year and we've shown that in our performances last week and against Bath," added Mallinder.

"We're going to look forward to it. We've got seven massive days, but we have a chance."

Saints have never won a Premiership title, but are now just one game away from becoming the first English side to win a Challenge Cup and domestic league double since Wasps in 2003.

Captain Tom Wood added: "It's been hugely frustrating for the last four years to get so close.

"It's been a long time coming. We want to go and do that double now."