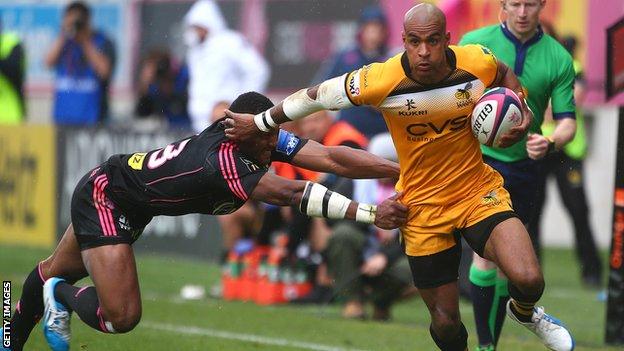 The Premiership side edged last week's first leg 30-29, and finished the job in Paris to qualify for European rugby's new elite club competition.

Tom Varndell's try plus a penalty and conversion from Andy Goode gave Wasps a 10-6 half-time advantage.

At stake was the 20th place in next season's inaugural Champions Cup, which replaces the Heineken Cup.

Both teams finished seventh in their respective leagues and looked well matched in the first leg at Adams Park.

But Varndell's early score and Goode's accurate kicking put the visitors in a commanding position at the break.

Things could have been even better, but Joe Simpson had a try disallowed, with Wasps' James Haskell and Stade's Alexandre Flanquart yellow-carded after tempers flared.

Dai Young's side had another try chalked off in the second half after a knock-on in the build-up to Varndell crossing.

But, with the hosts a man light after Antoine Burban was sin-binned, Wasps stretched their lead as Thompson completed a fine team move.

Goode converted, and completed the scoring by slotting over a 40-metre penalty after replacement Michael van Vuuren was the fourth player sin-binned.