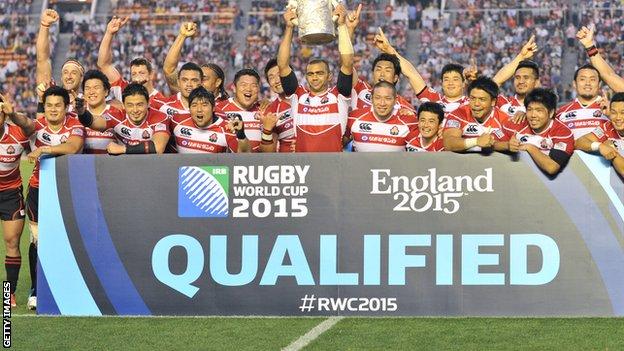 Japan have qualified for the 2015 Rugby World Cup in England after clinching the Asian Five Nations title on Sunday.

A 49-8 defeat of Hong Kong in Tokyo ensured they maintained their record of appearing in every tournament to date.

They join Scotland, South Africa, Samoa and the United States in Pool B of the 20-team competition which begins in September next year.

Hong Kong can still join them despite the loss, if they come through the four-team repechage.

If Hong Kong were to beat Uruguay in the first round, they would then face either Russia or an African team in the final. Should they win that, they would secure the last place in Pool A alongside the hosts, Wales, Australia and either Fiji or the Cook Islands.

Japan, the hosts of the 2019 tournament, are coached by Eddie Jones, who led the Australia team defeated by England in the 2003 final in Sydney.