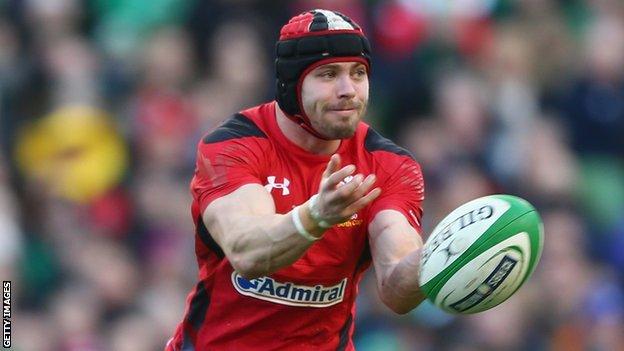 Wilkinson's penultimate game before retirement saw Toulon retain the Heineken Cup with a 23-6 victory over Saracens in Cardiff, kicking 13 points.

Halfpenny, 25, will leave Cardiff Blues to join the French giants next season on an initial two-year deal.

"I've spoken a fair bit to Leigh. He's going to be such a great addition to the team," said Wilkinson, 35.

Halfpenny was voted man of the series in the British and Irish Lions' win over Australia in 2013 and was named the 2013 Rugby Union Writers' Club Player of the Year.

He scored 49 points in the summer's three Lions Test matches, breaking Neil Jenkins' record for most points in a series including 21 in the 41-16 third Test win in Sydney.

Halfpenny's prowess as a goal-kicker makes him an ideal replacement for the equally accurate Wilkinson at Toulon.

But 2003 World Cup winner Wilkinson says that Halfpenny's kicking skills are simply a welcome addition to his all-round contribution.

"Of course he's got all those extra skills and all those things he can do. Everyone knows that and everyone's seen it," Wilkinson said.

"It's not about whether or not you can kick the ball over the posts from there or there, it's about what you bring to the team in terms of your contribution as a person and a player in your consistency of values and ethics.

"What you see with him is another great professional and a world-class player.

"It's brilliant that Toulon will have the pleasure of having him contribute to the team."