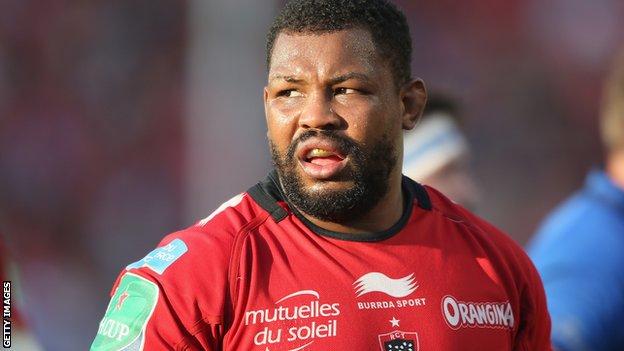 Steffon Armitage has been named ERC European Player of the Year on the same day he was left out of the initial 30-man England squad to tour New Zealand.

Armitage, 28, capped a fine season by winning the match of the match award as Toulon retained the Heineken Cup with a 23-6 win over Saracens on Saturday.

But England do not select foreign-based players, partly because they are unable to attend all training camps.

"It is not my rule but I agree with it," head coach Stuart Lancaster said.

"It is important for our best players to play in England. I would support it as a national coach."

Back rower Armitage said winning the award was "a great honour".

He added: "With us winning another Heineken Cup as well, everything has come together at the right time."

Toulon team-mate Jonny Wilkinson, who captained the French side to success at the Millennium Stadium on Saturday, won last year's award.

"To follow in the footsteps of Jonny Wilkinson as a winner is really special," said Armitage.

"There are a lot of big names at Toulon, but we're like one big family. Without my team-mates, this award wouldn't have been possible."