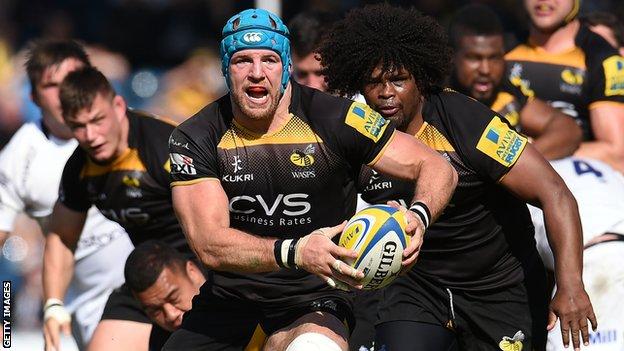 London Wasps flanker James Haskell believes his best form is yet to come after his recall to the national setup for England's tour to New Zealand.

But Haskell admitted he thought his international career might be over after being left out of the Elite Player Squad in August.

I've had a problem with my knee for a long time, and I didn't realise how bad it was

"I think I'm on an upward curve as to where I could go," he told BBC Sport.

"I'm 29 but the way I feel I could keep playing for a lot longer. I'm loving my rugby and I'm very happy."

Haskell dropped down the pecking order following the emergence of Tom Wood, Billy Vunipola and Ben Morgan, while Chris Robshaw has been a fixture in the number seven shirt for the last two years.

He did feature in all five games of England's 2013 Six Nations campaign but missed the summer tour to Argentina through injury before being left out of the EPS last year, meaning he sat out this season's autumn internationals and Six Nations.

Haskell, who has won 50 caps since making his debut in 2007, is one of the few survivors from the tour to New Zealand in 2008 and the World Cup in 2011, both of which were marred by off-the-field troubles.

But he is confident that there will not be a repeat this time around.

Although he believes his best position is on the open-side flank, Haskell is set to compete with Exeter's Tom Johnson to wear the blind-side flanker shirt in the first Test in Auckland on 7 June.

Haskell says his good form for Wasps this season, with Dai Young's side finishing seventh in the table and qualifying for Europe, is because of a number of factors, both on and off the pitch.

"I've always been focused on rugby, but it's a tricky battle to get the balance right if you have interests outside of rugby," said Haskell, who also identified the coaching of Young, defence specialist Brad Davis and assistant boss Steve Jones as key factors in his resurgence.

"Being single means there are no stresses and I'm fit. I've had a problem with my knee for a long time and I didn't realise how bad it was. That's been a massive difference."

Another man who has been rewarded for his good form for his club is Worcester full-back Chris Pennell, who has won his first call-up at the age of 27.

Pennell excelled despite featuring in a Warriors side which was relegated to the Championship after winning just two league games all season, but said he was worried the club's struggles may have cost him.

"I guess this is proof the England coaches are prepared to give you a shot as long as you are performing to a good standard," he said.

"I'm really pleased to have got that plane ticket, but the ultimate goal is to pull on the jersey. I'm determined to make sure I take the opportunity I've been given."