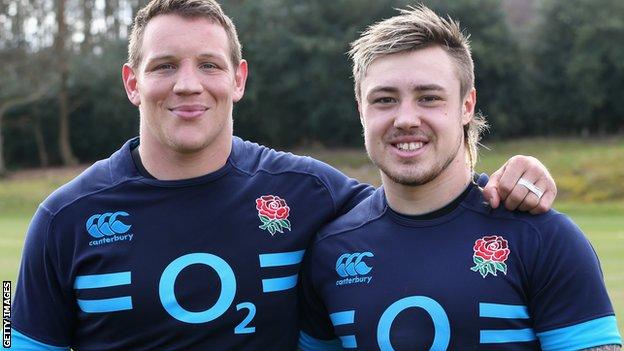 Tom Johnson and Luke Cowan-Dickie will be next month.

Henry Slade, Sam Hill and Dave Ewers could all face the Barbarians.

"We're there, we can produce international players and we can help you maintain and keep a place in an England squad," Baxter told BBC Sport.

"International rugby and recognition is a big part of it and it's great to see that we're showing, as a club, that's part of something that we can help players with."

On top of those five players, Exeter winger Jack Nowell, who has just had knee surgery, was an ever-present in this year's Six Nations squad.

Johnson, 31 has been with the Chiefs since 2007 while Exeter's other call-ups have all come through the club's academy.

Ewers, 23, has spent time on dual-registration at Cornish Pirates while 21-year-olds Slade and Hill, and 20-year-old Cowan-Dickie, were all part of the England squad that won last summer's Under 20s World Cup.

"You look at Tom Johnson and Jack Nowell playing in the Six Nations this year and they don't need to be thinking of moving to any other club other than Exeter," continued Baxter, who last summer.

"We're seen as a team now by the England management, they like the style of rugby that Exeter play.

"I think it means they can drop easily into the attacking style that England are wanting to play.

"So, I think if anything playing at Exeter, I'm not going to say it's one of the ways to get international recognition, but it certainly won't hinder you in any way."