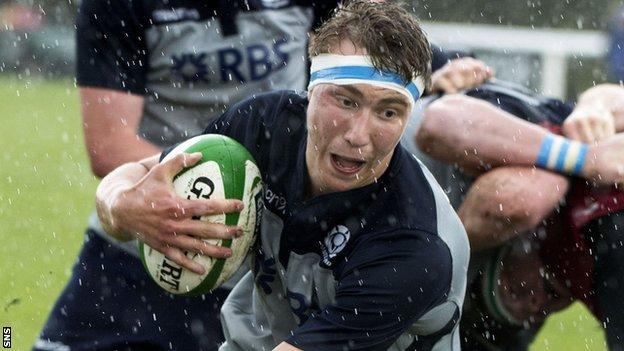 Edinburgh believe Jamie Ritchie is such an outstanding prospect that they have signed the 17-year-old from Howe of Fife for their first-team squad.

The Scotland Under-18 captain has been selected for the national under-20 squad for this summer's Junior World Championships in New Zealand.

I didn't dream of being offered a senior contract so obviously that, combined with what Alan Solomons has got planned for the club, makes it very exciting

"We now have a strong group of fine young Scots coming through."

It means that back-row forward Ritchie goes straight from being a pupil at Strathallan School to professional rugby.

"The manner in which he handled himself when he met the squad and staff, and his ability to handle the physicality of our sessions during a short trial, confirmed to me that he is ready to make this step," said Solomons.

"Important to him, I believe, was to understand our vision, which is to build a club through the medium of our academy of young Scottish players.

"Jamie is now going to be part of that, which I think is brilliant."

Ritchie was also a silver medalist at the British judo championships in 2009, was British independent schools judo champion in 2010 and played cricket for his school but is delighted to be given his chance to play rugby with Edinburgh.

"I didn't dream of being offered a senior contract so obviously that, combined with what Alan Solomons has got planned for the club, makes it very exciting," he said.