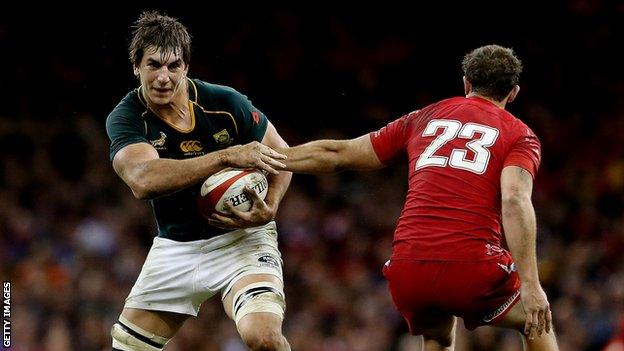 South Africa are likely to be without lock Eben Etzebeth for the June Tests against Wales and Scotland.

The 22-year-old faces a further three weeks of treatment.

"Eben's situation is a major setback as he's been one of our best players in the last two seasons," said Springbok coach Heyneke Meyer.

"We're continually monitoring his injury, because he really wants to play for the Springboks next month.

"However, he is still young and has a highly promising career ahead and his welfare is the most important to us."

South Africa will also be without captain Jean de Villiers for the Tests, with the Stormers centre ruled out for up to eight weeks because of a left knee injury.

The Springboks face Wales on 14 and 21 June before hosting Scotland on 28 June in Port Elizabeth.