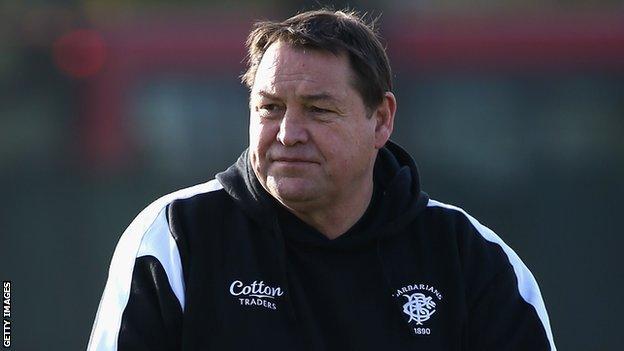 New Zealand coach Steve Hansen says the Test series against England should not have been scheduled for June.

England will face the All Blacks in the first Test in Auckland on 7 June without their Saracens and Northampton players, who feature in the Aviva Premiership final the week before.

Hansen thinks the three-Test series should have been postponed to ensure England could select their top players.

"The obvious solution would be to move the Test series to July," he said.

"I don't know why they don't want to do that.

England coach Stuart Lancaster has named an initial 30-man squad, which includes seven uncapped players, and will add to the squad on 2 June following the Premiership final and the England XV's match against the Barbarians the weekend before.

Players selected in the second group, who are likely to include Northampton's Courtney Lawes, Tom Wood, Luther Burrell and Saracens' Owen Farrell and Billy Vunipola, will be available for the second Test in Dunedin on 14 June.

Hansen hinted that he may not pick Kieran Read and Aaron Cruden for the first Test because they are short of match fitness.

No 8 Read, 28, returns for Crusaders against the Force on Friday after six weeks out with concussion, while fly-half Cruden, 25, is set to make his first start for the Chiefs in seven weeks since breaking his thumb.

"There's another game this weekend so we'll have to wait and see who comes through that and how they come through it," Hansen said.

"Both of them are in a situation where they haven't had a lot of game time and we can't change that. That's just life.

"We'll make our judgements on them once they get through Saturday. If they both play and they come through that, we'll get the group together and make some decisions on who's going to start."